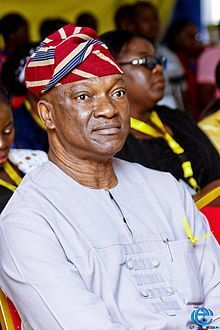 Atiku’s Campaign DG Ogunbambi have said that Jimi Agbaje can never have the character of Oyo’s state governor elect Seyi Makinde, he said he wished he had discovered this much longer that Jimi is nothing but a “monumental fraud and con man,”

While speaking, he said Agbaje is Only Using PDP To Amass Wealth Every Four Years.

The crisis in the Lagos State chapter of Peoples Democratic Party (PDP) over fallout of the last general elections got messy on Wednesday with one of the major gladiators revealing sordid details of how campaign funds from Abuja were allegedly cornered by the governorship candidate of the party, Mr Jimi Agbaje.

Reacting to allegations of sabotage leveled against him by Agbaje during a postmortem meeting on outcome of the elections, Director General of Atiku Abubakar Presidential Campaign Council in Lagos State, Chief Layi Ogunbambi said it was unfortunate that the PDP gubernatorial candidate in the state could degenerate to such lowest ebb of fabricating vicious lies just to cover up his inadequacies and greed.

Ogunbambi said right from when he was appointed as DG of Atiku campaign council, Agbaje refused to work with him, despite spirited efforts to diplomatically make him (Agbaje) change his mind and see the reason for all of them to work together.

“Let me quickly seize this opportunity to thank our leader, Chief Bode George, immensely for the confidence reposed in me all the time since l became a member of Lagos State PDP. l was duly sworn in as DG of Atiku campaign council at the Party Secretariat in lkeja and curiously Jimi Agbaje never called me to discuss with me the operations and work schedule of my office.

“There was no template for harmonization of his group with the legitimate organ and structure at the party office in lkeja.With his rigid application of dogma and the ”larger than life” ego, it was patently obvious that he was not going to work with me and the party on 2019 general elections.

“ln fact, he made it clear to many and even went on social media to put on record that he was not going to have anything to do with me as the DG. l spoke with him several times on the phone in my attempt to diplomatically bring some focus and sanity to his ego without any success,” Ogunbambi alleged.

The DG said the calls were made in the presence of many party bigwigs, while he went further to talk to Agbaje’s close friend in an attempt to make him see the need for unity in the larger interest of the party, all to no avail.

“The Chairman of the Party, the former Chairman of the Party, Rtd Navy Captain Shelle and Taofeek Gani were all there at each occasion these calls were made to Jimi. l also engaged his friend (Osibodu) for several hours on the phone to get him to get Jimi to see reason in the larger interest of the party, but that, in Osibodu’s own innocent naivety, was more interested in the so-called integrity mantra of Jimi than the larger issue of party cohesion, integration and harmony, hence, and again, all the discussions with Osibodu never amounted to anything significant in the directional way foreword for the party.

“The stagnation remained substantially the same to date. Jimi was emphatic when he said publicly that Leke was his DG because he needed somebody he could control just like he wanted to control the entire party with his inner core group of serial and jobless politicians that have done more to disfranchise the Party in Lagos State for years now,” Ogunbambi said.

While questioning the basis for Agbaje’s allegations that he wanted to sabotage his political efforts, Ogunbambi said the PDP gubernatorial candidate had again exposed his character to the glare of public scrutiny, adding that all his (Agbaje’s) interest was the campaign funds from Abuja.

He described Agbaje as a cancer to Lagos PDP who is only using the party to amass enormous wealth for himself every four years in the guise of gubernatorial candidate.

“Listening again to his (Agbaje’s) own version of the money brought from Abuja and the version of the Chairman of the Party, l ask you all: who was telling the truth yesterday? You can lie and deceive the people some of the time but you cannot deceive them all of the time.

“Jimi is a cancer in Lagos PDP. A proclamation of no confidence and integrity in him is the most viable option left to the Party and l urge you all to consider it with the seriousness that it deserves!

“My issue with Jimi is not about Ceaser and Brutus. lt is about a man l supported with my time and money in 2015 and 2019, and later discovered that he was nothing but a serial politician coming every four years to use our Lagos PDP platform to amass enormous wealth for himself.

The DG also alleged that most of the businessmen who initially bought into the vision of Agbaje and supporting his campaign had since left him having discovered the truth about his character.