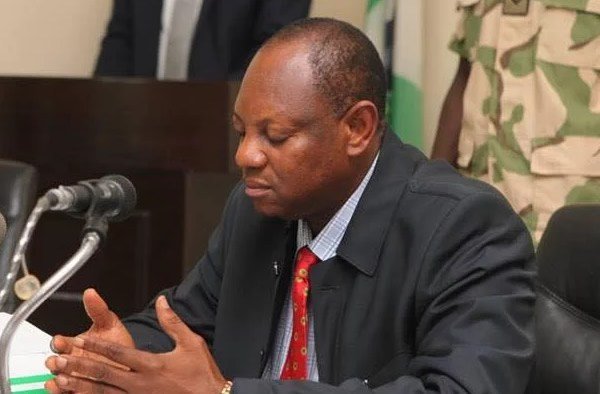 The discovery of the cash was made a few hours after his arrest by a combined team of EFCC and ONSA operatives.His arrest, which the Head, Media and Publicity of the anti-graft commission, Mr. Wilson Uwujiaren confirmed, in response to THISDAY’s enquiries, took place on Monday.

A senior security agent also told THISDAY that Boroh was picked up from his home in Gwarinpa, Abuja, on Monday, but was taken back to his residence at about 3 a.m. Tuesday by the security operatives who raided his house for hours and made the cash discovery of $9 million at his home. He remains in the custody of the EFCC.

“The former adviser was driven to his home in an unmarked car after his arrest. His home was searched for several hours and about $9 million cash was discovered in several safe boxes in several parts of the house,” the senior security agent stated.

“The combined team of EFCC and the National Security Adviser operatives were very thorough with the search. Indeed, at a point, the operatives broke all the locks in the home including his wife’s closet. The recovered cash has been deposited at the Office of the NSA.”

With the $9 million cash haul at Boroh’s residence, this will add to other cash discoveries made by the EFCC in the last two years, including the infamous $44.3 million found in the apartment at Osborne Towers, Ikoyi.Within 24 hours of that discovery, the National Intelligence Agency (NIA) had laid claim to the cash, claiming that the apartment was used as a safe house for its operations in the South-west.

The discovery eventually led to the sack of the NIA director general, Ambassador Ayodele Oke.Buhari sacked Boroh last week and announced Prof. Charles Dokubo as his replacement.In the statement announcing Boroh’s dismissal, it said the NSA, Maj.-Gen. Babagana Monguno (rtd), had been directed to probe the activities of the Amnesty Office from 2015, when Boroh was appointed, especially allegations of financial impropriety and other acts that were allegedly detrimental to the objectives of the Presidential Amnesty Programme.

According to investigations by THISDAY, Boroh’s sack, investigation and arrest by the EFCC may not be unconnected to a petition, among others, that was sent to the president last August.In the petition to Buhari dated August 21, 2017 and signed by one Timi Angalabiri, on behalf of the Niger Deltans for Accountability and Good Governance (NDAGG), the group had requested the president to suspend the ex-Amnesty Programme boss “for a credible investigative inquiry to commence into the non-payment of tuition fees and living expenses of recently graduated Niger Delta students in universities across the United States, the United Kingdom and Nigeria, with many institutions withholding the students’ certificates due to the non-payment of tuition fees ranging from nine months to two years, despite receiving over N70 billion within this time frame”.The petitioner further pleaded with Buhari to use his good office to prosecute Boroh and others for allegedly diverting the sum of N70 billion.

Shortly after the petition was written, rumours swirled about Boroh’s sack by the president, but they were dismissed by the former Amnesty Programme boss.“This story about my suspension and even sack has been off and on in the media, but the truth is that I have not been sacked and no one should disrupt the relative prevailing peace in the Niger Delta region with such fake news,” he had said.

“What is happening is the handiwork of political enemies and those who do not want the region to be peaceful. The rumours they are peddling are just rubbish and unfounded. Under my watch, the programme, candidly speaking, has helped greatly to stabilise the region.”

But even as information reached THISDAY of Boroh’s arrest and the $9 million cash haul at this house, the Reformed Niger Delta Avengers and 10 other militant groups Tuesday threatened to attack oil installations in the Niger Delta if the sacked coordinator of the Amnesty Programme was not reinstated in four weeks.

According to the News Agency of Nigeria (NAN), Johnmark Ezonbi, leader of the Reformed Niger Delta Avengers, said the federal government would “hear from them” if Boroh was not reinstated.He said the sacked coordinator of the Amnesty Programme played a significant role in prevailing on the militants to end the attacks on oil installations, warning that it was obvious that the government was toying with the destiny of the Niger Delta.

The statement by Ezonbi read: “The federal government will hear from us at the expiration of the four weeks ultimatum as no single stone will be left unturned as the administration prefers to go back to the recession period when Boroh played a major role by visiting the creeks with other stakeholders to prevail on the boys to drop their arms and embrace peace.

“We will embark on a well coordinated destruction of all major delivery oil pipelines after the expiration of the four weeks ultimatum without looking back.

“I want to warn that any intruder into our planned action in four weeks time, if the federal government fails to reinstate General Paul Boroh, will be severely dealt with without mercy because our attacks will make the security agencies in the creeks very small.

“We are fully ready to take on anybody as we have the instruments of warfare that will make the biggest military might marvel at our coordinated attacks.

“We are ready to dirty our rivers and creeks with our oil, it is better we spill it than allow government use it to develop other parts of the country.”He said Boroh made efforts to put the Amnesty Programme back on track with the regular training of ex-militants and prompt payment of monthly stipends.