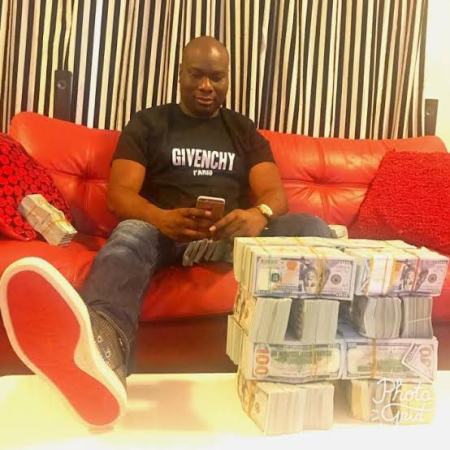 The EFCC has announced the arrest of a popular Social Media celebrity, Ismaila Mustapha  a.k.a Mompha for an alleged involvement in internet related fraud and money laundering.

According to the EFCC , “actionable cross border intelligence received from collaborative law enforcement agencies about his alleged involvement in the criminal activities further strengthened our suspicion

Mompha shows off his N20m wristwatches

Mompha with one of his exotic cars

“Ismaila who allegedly perpetrates his fraudulent activities under the guise of being a Bureau de Change operator is always seen with his little son flaunting huge amount of foreign currencies on his social media platforms.

“Investigations have also revealed that Ismaila is only using the BDC business, he jointly owned with his siblings, as a decoy to launder his proceeds of crime.

“However, the suspect has volunteered useful information to the operatives and has admitted to be reasonably involved in the first two cases he was alleged to be involved.

Mompha with a Rolls Royce

Mompha sitting in a private jet

“The suspect will soon be charged to court as soon as investigation is concluded”.

Mompha’s arrest triggered a huge buzz on social media on Tuesday. He became the No. 1 trending topic.

Lmao if you’re a Yahoo boy, just know your file is on the table of FBI.

They’re just gathering information on how they will pick you up.
They are currently going after big fishes.
From Invictus to Mompha to S.P to y’all
No single person would be exempted.
They have your records.

On his Instagram account, Mompha who decribes himself as citizen of the sky and Emirates Platinum customer often flaunts his ostentatious lifestyle, with luxury cars, watches, air travels and so on.

The account mompha  describes him as CEO of Mompha Bureau de Change. The EFCC and other global agencies involved in the arrest are claiming his wealth is questionable.