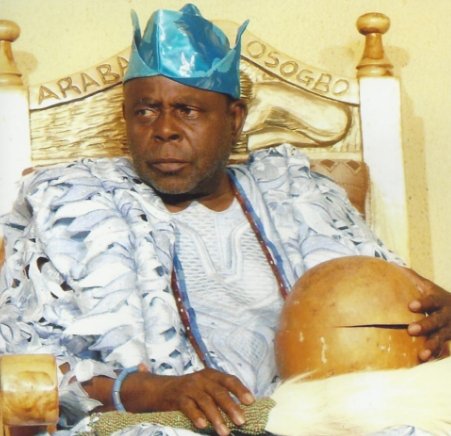 It was about midday and their vehicle halted towards Ifayemi Elebuibon Street, stopping at the very pole in front of the expansive residence of the Ifa priest. Four PHCN officials alighted from the vehicle. A group of residents, whose electricity cables had been disconnected some distance up the street, had followed the vehicle on foot. The leader of the team, a dark-skinned middle-aged man, opened a conversation with the restless residents.

Two men, who appeared to be the youngest in the PHCN team, brought down a brown, long wooden ladder hinged to the top of the pickup. As they were mounting the ladder against the pole, Elebuibon came out of his compound. He greeted them and asked what their mission was. The team leader told him that they were going to disconnect the cable supplying his house with electricity unless he produced a bill showing that he was not owing the PHCN. The babalawo told them that he was not owing the PHCN and added that it was not his place to produce any bill. He said the PHCN should have a record of those who had paid up their bills just as he stressed that he had never owed electricity tariff all his life. Some residents intervened and told the officials that the Araba never owed electricity bills.

Shunning all entreaties, one of the PHCN officials rebuffed the pleas and started to climb the long ladder. Residents yelled and told him not to climb the ladder, but he refused, climbing and grumbling. Elebuibon raised his hand, saying ‘e je o gun, to bati le bo’le’; meaning: let him climb the ladder if he would be able to climb down from it. One! Two! Three! Four!…the brave official climbed the ladder to the top. Suddenly, he stopped grumbling, became utterly silent, distant and hazy.

He couldn’t disconnect the cable, neither could he come down. Looking as cool as cucumber, he chewed a gum slowly, absent-mindedly and remained at the top of the ladder, blinking and oblivious of the flood of pleas gushing on his behalf down below.

The other three PHCN officials at the foot of the ladder sweated and begged. Together with residents, they pleaded with Baba Elebuibon to set the young man free. Elebuibon yielded. ‘Arakunrin, ma bo nle (young man, come down),’ he simply said, snapping the detainee out of his forced reverie. The Ifa priest later told one of his children to go inside his house and bring the bill showing he had paid his electricity tariff. Elebuibon was able to resist the highhandedness earmarked for him by the PHCN, but do millions of Nigerians, whose businesses and well-being are tied to electricity supply, have the arcane power to such do?

Repent of your corrupt antecedents, Clergy tells IBB over moves against Buhari 2019 ambition