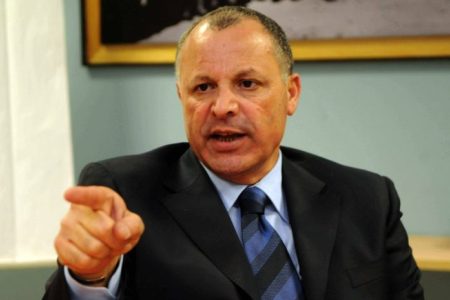 The president of the Egyptian Football Association Hani Abou Rida late Saturday sacked the technical crew of the national team, the Pharaohs after their shock elimination from the African Cup of Nations.

The decision had been “a moral obligation” said the Egyptian FA in a statement after “disappointing Egypt’s supporters” in a 1-0 defeat to South Africa, adding that all board members had been invited to resign.

Saturday’s match saw rank outsiders South Africa stun the record seven-time African champions whose line-up included Liverpool star Mohamed Salah and who were among the favourites to win the tournament.

Rida, a former footballer, had led the Egyptian FA since 2016, in a three-year reign marked by controversy, including a 2018 World Cup fiasco that saw the Pharaohs fail to get out of the group stages after losing all of their matches.

The location of the team’s training base in Grozny, the capital of Muslim-majority Chechnya, spurred widespread criticism — especially from human rights groups — over concerns of abuses by Chechen President Ramzan Kadyrov, supported by Russia’s President Vladimir Putin.

The federation has also feuded with Salah, the reigning African Footballer of the Year and won the Champions League last month with his club Liverpool, who has accused the body of misusing his image inside the country.

Recently the reinstatement of a player who had been banned following sexual harassment charges had provoked further widespread criticism of the Egyptian FA on social media.

Egypt’s coach Javier Aguirre came in for criticism for his management of the side during the African Cup of Nations, with Egypt legend Wael Gomaa accusing the Mexican of having “no tactics or strategy”.

Following Saturday’s defeat, Aguirre said he alone took the blame for the host nation’s disastrous campaign and indicated he would hold talks with the Egyptian football association over his future.

Egypt had been tipped as leading title contenders on home soil but came unstuck against a South African team that only scraped through into the knockout phase via the last of four spots reserved for the best third-place sides.

Thembinkosi Lorch scored the only goal of the last-16 match in the 85th minute to give South Africa a stunning victory.

“No decision until this moment. I spoke to the players in the dressing room, and tomorrow (Sunday) will speak with EFA officials,” Aguirre said after the final whistle.

“I think the game was open and there were chances for both teams. The only difference was the goal for South Africa,” he added.