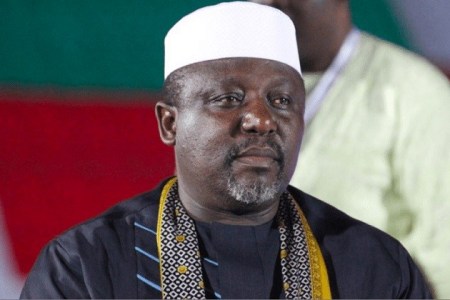 The Senator representing Imo-West and immediate past Governor of Imo State, Rochas Okorocha has alleged that the acting Chairman of the Economic and Financial Crimes Commission (EFCC), Ibrahim Magu, and the National Chairman of the All Progressives Congress (APC), Adams Oshiomhole, were holding secret meetings on how to send him to jail.

The former Governor claimed to have been tipped off by a top detective of the anti-corruption agency.

The Punch reported part of a text message allegedly sent to Okorocha by the operative as follows:

“Your Excellency, I will like to give you this information. You must be careful. There is a plan to either eliminate you or sink you politically. They said you want to contest for the deputy senate presidency, a position that will give you an edge to contest as President in 2023, so everything must be done to get you out of the way.

“The arrowhead of this plot is Adams Oshiomhole. He has vowed that he will block you from realising your ambition and the first step towards achieving this was to make sure your preferred successor did not emerge. He has been having secret meetings with our Chairman, Ibrahim Magu, over your matter.

“One of my colleagues, Abdullahi, has been given the task to liaise with INEC and meet with one Aminu in the legal department of INEC and two powerful women in the department as well as some national commissioners over your matter.”

Punch also reported that, in his originating motion with suit number FHC/ABJ/CS/475/19, the former governor claimed he had come under serious attack from Oshiomhole because he worked against the latter’s bid to become the chairman of the APC.

In a supporting affidavit, Okorocha said Oshiomhole also blamed him for his detention by the Department of State Services during the build-up to the 2019 general elections, adding that his wife, children and in-laws were already being targeted for arrest.

It stated further, “The plan has now reached a crescendo and desperation in view of the failure of the respondents to find anything incriminating against me and the decision now taken by the instigator of the respondents is to arrest and detain me in Abuja.”

In a counter-affidavit, however, the EFCC denied all the allegations levelled against it by Okorocha.

In the counter-affidavit deposed to by one Samson Oloje, a litigation officer with the commission, the EFCC said Okorocha’s claim that an operative informed him of secret meetings between Oshiomhole and Magu was baseless.

“That no operative of the 4th respondent called Abdullahi or by any other name has been given the task to liaise with INEC, Aminu of INEC and/or any other person to decimate the applicant politically and/or annihilate him.”

In their counter-affidavits, the Department of State Services, the Office of the Attorney-General of the Federation and the Independent Corrupt Practices and other Related Offences Commission denied claims by Okorocha that they were being used by the APC to victimise him.

Subsequently, Justice Taiwo Taiwo of the Federal High Court, Abuja granted a motion ex parte barring all the respondents from investigating or arresting the Senator.