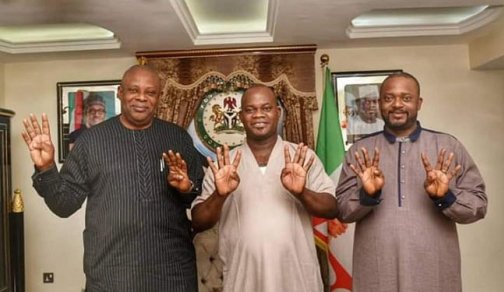 Governor Yahaya Bello’s campaign for re-election on 16 November as Kogi governor got a boost at the weekend with the decision of Reps member James Faleke to support the bid.

Faleke was the running mate to the late Prince Abubakar Audu in the 2015 Kogi governorship election and has a good following in the state.

The picture of Faleke and Bello, together with his running mate, Chief Edward Onoja, taken together in Abuja, has gone viral.

Faleke said it was true that he had agreed to support Bello’s re-election bid, adding: “Yes, following the decision of the leadership of Audu/Faleke group to work with the governor, and as loyal party men and women, I on behalf of the group, met the governor to chart the way forward and build a strong and united All Progressives Congress (APC), before the election.”

“We have put all issues in the past. I will be in a better position to always assist and advise the party and government in the state to execute people friendly programmes,” he said.

Faleke said since he had returned to Lagos, it would be bad of him not to align the members of the Audu/Faleke group with the government and the main politics of the state.

“It is, therefore, necessary as loyal party members to assist, by bringing the party faithful who have been with me through thick and thin in the last four years, to the governor.

“By God’s grace, we will arrange to hand them over at a future meeting, as soon as possible. Although I have no vote in Kogi, I have numerous followers in the state.

“Let us be clear that although I have no vote in Kogi State, I have massive followership and have a strong voice, which will be seen in the outcome of the elections,” he said.

The Chief Press Secretary to the Governor, Mohammed Onogu, said in a statement that the decision was arrived at during a meeting between Faleke and the governor and his running mate, Onoja.

The development has triggered some excitement in the state.

The Director-General of GYB/CEDO Campaign Organisation in Kabba/Bunu Local Government Area of Kogi State, Duro Meseko, described the rapprochement as the best thing to have happened to the party in the state.

In a statement, Meseko said with the coming together of the two gladiators of APC, the coast is clear for a resounding victory for the party in the coming governorship election.

“For me, the rapprochement between Governor Bello and Hon. Faleke today is one of the best things to have happened to our great party, in terms of the unity it will engender, besides other dividends that will accrue therefrom. I am indeed excited that the APC in Kogi is now a closely knit family, united for good governance”.