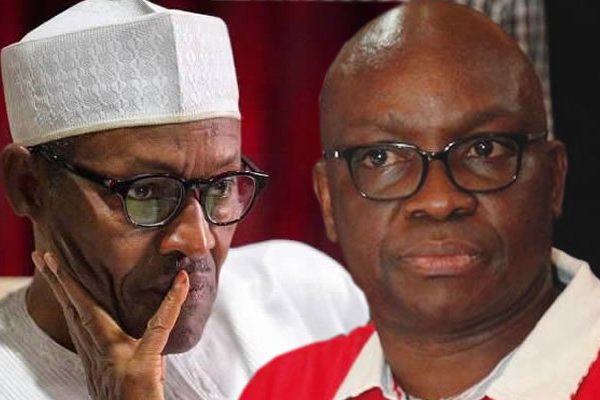 Ekiti State Governor, Ayodele Fayose has told President Muhammadu​ ​Buhari to stop being hypocritical about his fight against corruption
​.

He told Buhari to ​first ​rid his government​ and the APC​ of corrupt elements​.​

”​Someone​ ​needs to tell the President that Nigerians no longer believe in his​ ​anti-corruption fight because he harbours the most corrupt Nigerians​ ​in his government”, he said.​

Buhari had during the presentation​ ​of the book, ​’​Making Steady Sustainable Progress​’, declared ​ that any public​ ​official caught will go to jail.

​In a statement on Friday by his spokesman, Lere Olayinka, Fayose​ ​asked: “How many of those indicted of corruption in President Buhari’s​ ​government has he jailed? Isn’t it the height of hypocrisy for a​ ​President that is using APC broom to sweep corruption involving his​ ​men under the carpet to be talking about jailing anyone caught​ ​stealing public fund?”

The governor, who insisted that President Buhari was only hiding under​ ​
anti-corruption fight to harass his perceived political foes, said,‎

“We have a President who is the Life Patron of Corruption in Nigeria.​ ​His government is not only corrupt, the government itself is​ ​corruption! Sadly, our President is still carrying on with the mindset​ ​that Nigerians are still listening to his lyrics of ‘we are fighting
corruption.​

“Today, it is seventeen days since President Buhari sacked the​ ​suspended Secretary to the Government of the Federation SGF, Babachir​ ​Lawal, and the Director General, National Intelligence Agency (NIA),​ ​Ayodele Oke, has any of them been arrested by the EFCC?

“Apart from sacking Oke, has President Buhari told Nigerians any other​ ​thing about the $43 million discovered in the Osbourne Towers, Ikoyi,​ ​Lagos apartment? Who owns the apartment?

“What has happened to those involved in the fraudulent reinstatement​ ​of the former Chairman of the Presidential Task Force on Pension​ ​Reforms, Mr Abdullahi Maina, who was declared wanted for corrupt​ ​practices by the International Police Organisation, (INTERPOL) after​ ​he was dismissed from office by the Civil Service Commission in 2013​ ​for allegedly committing N2.1 ​b​illion pension fraud while in office?​ ​Why hasn’t Maina been arrested by the EFCC up till now?

“Isn’t the same Abba Kyari, who was accused of collecting N500 million​ ​bribe from MTN still Buhari’s Chief of Staff? Has anything been heard​ ​​about the $5 billion fine imposed on MTN by the federal government​ ​​after Abba Kyari allegedly received the N500 million bribe?

“Methinks President Buhari should face the reality that there are​ ​people in his government that should be in jail by now for corruption.​ ​​Not until he jails those corrupt elements that are wining and dining​ ​with him, Nigerians will continue to liken his threat to jail anyone​ ​who steals pubic fund with a cow thief threatening to jail a fowl​ ​thief.”