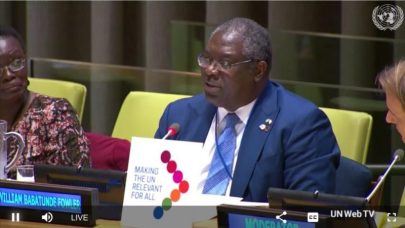 The Federal Inland Revenue Service (FIRS), has raked in N97.7 billion from tax defaulters since it directed banks to put a lien on their accounts, its Executive Chairman, Mr Tunde Fowler, said on Wednesday in Abuja.

Fowler disclosed this at the 49th Annual Accountants Conference, organised by the Institute of Chartered Accountants of Nigeria (ICAN), where he presented a paper titled: “FIRS Power of Substitution: Critical Review and Matters Arising”.

Under the Tax Substitution Programme, FIRS intensified its efforts to collect taxes from defaulting payers, by appointing banks and other financial institutions as collection agents.

The banks as tax collecting agents were directed to make specific deductions from alleged tax defaulters’ accounts and pay the monies over to the FIRS in full or partial payment of the alleged tax debt.

The legality of this action by the FIRS is, however, being questioned in different fora.

Fowler, in his presentation, defended the stance of FIRS, stating that he would do whatever was necessary to boost government revenue.

The chairman explained that before the FIRS took that stance, it had undertaken tax amnesty programmes such as the Voluntary Assets and Income Declaration Scheme (VAIDS), without much success.

Giving a breakdown of the money recovered, he said that through the Banking Turnover Exercise, the Service recovered N88.59 billion, after reaching agreement with 3,797 out of 42,736 companies.

He said that 74 out of 406 companies had paid about N4 billion under the Special Tax Audit Substitution Exercise.

Fowler said that the FIRS realised N3.84 billion after reaching agreement with 79 out of 800 companies under the VAIDs Substitution Exercise.

He added that through the Special Investigation Substitution Exercise, 47 out of 351 companies had paid N2.06 billion, and cautioned banks against refusing to cooperate or restricting access to specific bank accounts.

“As at today, there is a total of 23,141 tax defaulters who are yet to come forward to clear their outstanding liabilities of about N254 billion.

“FIRS, in collaboration with the banks, have started engaging in compliance measures, with regards to the tax defaulters and their accounts.

“Failure to carry out this directive will result in the banks being sanctioned according to Section 31 subsection 1-3 and 32 respectively, of the FIRS Act 2007.”

He warned that failure to comply would be seen as an act of economic crime to the nation which would compel the FIRS to enforce its rights and apply appropriate sanctions, starting with de-listing of the bank from FIRS collections.