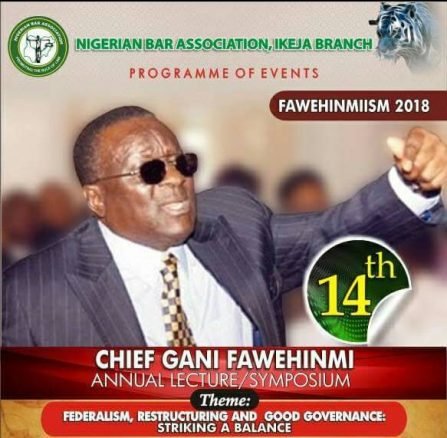 According to the Chairman of the Branch Mr. Ogunlana Adesina, the theme of this year’s lecture is  “Federalism, Restructuring and Good Governance: Striking a Balance”.

The chairman of the event is Chief Frank Ovie Kokor, Former General Secretary, NUPENG. The Chief Judge of Lagos State,  Honourable Justice Opeyemi Oke is the Special Guest of Honour while the Royal Father of the Day is Oba Semiu Orimadegun Kasali, the “Adeboruwa of Igbogbo”. 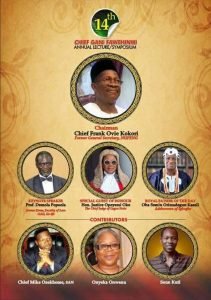 Speaking further on the 2018 edition of the Lecture which is also popularly referred to as “Fawehinmiism” 2018, the Chairman also noted that the event holds every January 15 in commemoration of the January 15, 1966 call to bar date of the late Luminary.

He hinted that gifts will be given to the first 100 guests to arrive the venue of the event.

Chief Gani Fawehinmi, a renowned human rights lawyer, author, publisher of the popular Nigerian Law Reports, politician and philanthropist was born April 22, 1938 in Ondo State. He studied Law at the Holborn College of Law, University of London. He was a fearless critic of military dictatorship and corruption.

In 2008, Fawehinmi rejected one of the highest honours that can be bestowed on a citizen by the government – Order of the Federal Republic (OFR) – in protest of the many years of misrule since Nigeria’s independence.

Gani, as he was fondly called, died in the early hours of September 5, 2009 after a prolonged battle with lung cancer. He was 71 years old.

The Annual Gani Fawehinmi Lecture “Fawehinmiism is held every year by the NBA Ikeja Branch in honour the late legal legend who  until his death was a member of the branch.

Fayose blasts governors for endorsing Buhari for a second term