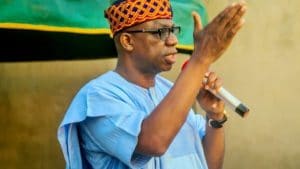 Ogun State Governor, Dapo Abiodun, on Thursday, threatened to deal with lecturers harassing students sexually in all the higher institutions of learning in the state.

Abiodun said he would exercise ‘the full weight of the law’ on any lecturer who takes sexual advantage of their students.

Abiodun emphasised that his administration would not condone any form of sexual intimidation or other vices in any of Ogun State-owned schools.

Speaking at the 11th convocation ceremony of the Tai Solarin University of Education, Ijagun, Ijebu-Ode, Gov Abiodun described the much-talked about sexual harassment as a thing of shame, adding that such a thing should not happen in any tertiary institution where discipline is taken seriously.

He, however, commended the Vice-Chancellor of the institution, Prof. Abayomi Arigbabu, for the sensitisation and warning publications embarked upon on the pages of national dallies.

He said the zero tolerance of the institution for sexual harassment is a pointer that indiscipline by any staff would not be condoned.

He said “Government notes with pride the sensitisation and warning publication by the vice-chancellor of this great institution.

“This government will not close its eyes to indiscipline and unwholesome attitude on the part of any staff.”

Meanwhile, the governor announced an automatic employment for the overall best graduating student in the College of Vocational and Technical Education, Bolatito Matthew Olatunde.