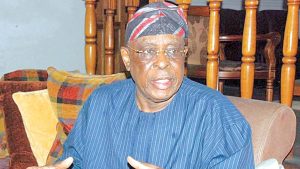 A former Governor of Ogun State, Aremo Olusegun Osoba, has vowed to kill the Hate Speech Bill being considered at the Senate.

Osoba spoke on Thursday during the ongoing 15th All Nigeria Editors’ Conference in Sokoto.

He noted that the Bill would have been dead on arrival if the Governor of Sokoto State, Aminu Tambuwal, was still the Speaker of the House of Representatives.

The former Governor, who was the chairman of the event, said “how I wish Tambuwal is still the speaker of House of Representatives; the Hate Speech Bill would have not seen the light of the day.”

He said the council will resist the draconian law stressing that some of them previously paid a supreme price in instituting democracy in the country.

“As a chieftain of All Progressives Congress, I will lobby the National Assembly to kill the bill.”