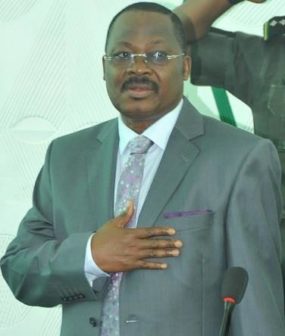 Sequel to to the judgement of the high court in Ibadan which declared null and void the panel of inquiry set up by the Oyo State Government to review the Ibadan 1957 Chieftaincy declaration and other related chieftaincy law, Governor Abiola Ajimobi, has vowed to appeal the court verdict.

The court also set aside the elevation of the newly promoted chiefs to monarch status as null and void.

Governor Ajimobi bared his mind during the inauguration of a block of classrooms donated to the Community Secondary School, Ajara, in Lagelu local government area of the state by a former Attorney General of the Federation and Minister of Justice, Chief Akinlolu Olujinmi, SAN, in Ajara, on Friday.

Ajimobi used the opportunity to restate his earlier position that the review, which culminated in the August 27, 2017 installation of 21 new obas, among whom were some erstwhile high chiefs and baales, was an altruistic gesture that was for the overall good of Ibadanland.

“Today’s judgment on the Olubadan Chieftaincy review will be appealed against immediately. Let me reiterate here that the review was an exercise that was well thought out. It is for the development and progress of Ibadanland and the people therein. We will not relent in our determination to make Ibadan great and the greatness shall come through various ways; one of which was the Olubadan chieftaincy review that was conducted by a judicial commission of inquiry. The truth is that people are normally opposed to change and radical policies that will eventually be beneficial to them, but we shall get there. We will not be deterred or allow retrogressive tendencies to override the progress Oyo State is currently making,” Ajimobi stated.

The governor commended Olujinmi for giving back to his place of birth and called on others of means to emulate the gesture, which, he said, would go a long way to complement the efforts of the government in developing the education sector.

He also advised parents to play their parts in giving qualitative education to their children in order to safeguard their future.

According to him, the event was another testament to the success of the School Governing Board (SGB) policy of his administration, adding that many schools had been transformed following the intervention of the SGB members.

”Today, we are celebrating another milestone in the success of the SGB policy with the commissioning of this project. Our foremost lawyer and son of the soil, Chief Akinlolu Olujimi, has bought into our policy direction aimed at restructuring our education system. I enjoin you all to let us continue to work hand-in-hand to further change the face of education in our state. I’m elated that we have been getting positive results from our various policies on education. I, therefore, call on other people of means to lend a hand.”

In his address, the donor said that he was happy to have contributed to the growth of education, especially in his own community, stating that he had decided to build another block of four classrooms in the same school.

He advised the students to concentrate on their studies so as to become great in the future and for them to also be in a good position to pay back to their communities.

Olujinmi said, “The SGB policy of the Governor Ajimobi administration is laudable. It has paved the way for somebody like me to contribute to the development of education in my locality and by extension in Oyo State. It is left for you students to reciprocate this gesture by forging ahead to attain excellence in your academic pursuits. The government has done its bit. It is your responsibility as beneficiaries of this progressive policy to aim for greatness.”