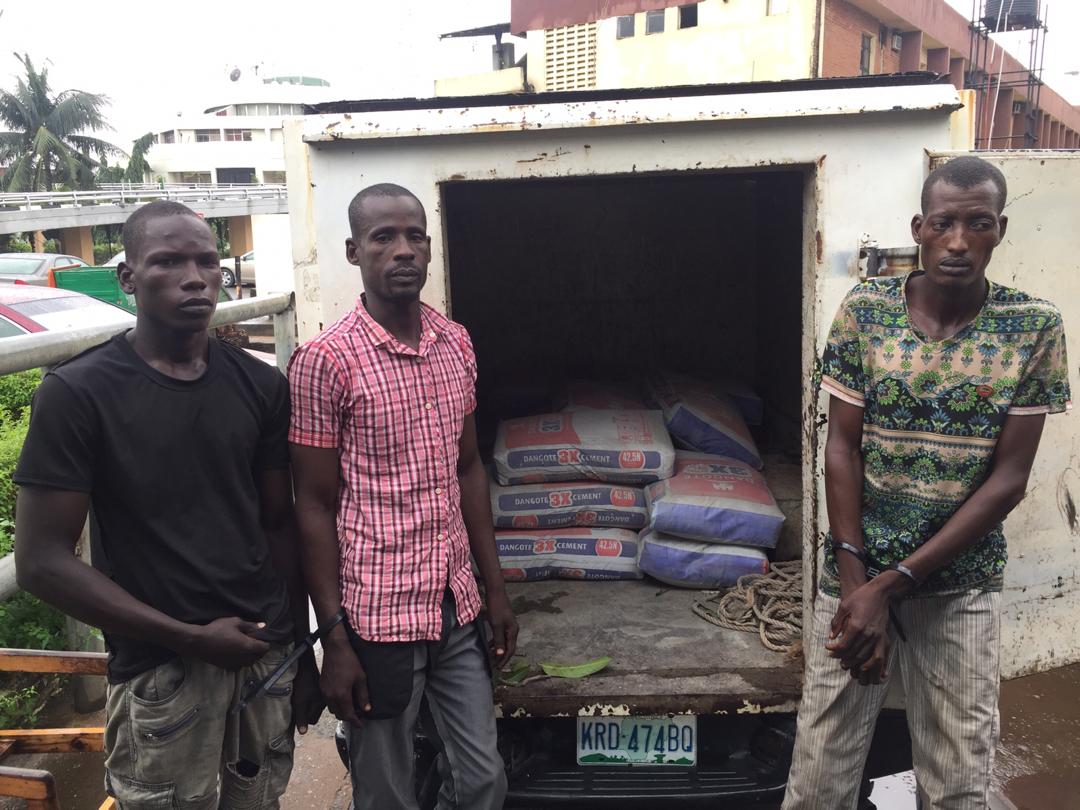 The operatives of Lagos Rapid Response (RRS), a unit of the Lagos Police Command have arrested a pick up driver who specialize in buying stolen construction materials from site workers in Lekki area of Lagos and reselling them.

The suspect, Hassan Abubakar. 32, was arrested while driving a white pick-up van with a registration number KRD-474BQ loaded with 21 bags of cement at about 5:30 a.m on Saturday by RRS officers on patrol of the area.

Hassan, when quizzed about how he got the 21 bags of cement lied he was a haulage driver contracted by a civil engineer working in MTN Estate in Lekki Phase 2 to help him convey the bags of cement from one construction site to another.

The officers who were not satisfied with his explanation insisted Hassan called the Site Manager to buttress his point. Sensing the game was up, he stopped responding to further enquiries put to him by the officers.

Not convinced by the excuse, Hassan and the exhibits were handed over to the Decoy Team of the RRS where investigations revealed that the suspect, in collusion with a site guard bought the stolen 21 bags cement at a construction site in Lekki.

The security guard, Adamu Ibrahim, 43 disclosed to the police that he stole the 21 bags of cement from the construction site, and that the owner of the site was based United States.

Adamu further to the police that the owner of the site engaged and to live there and man the site. He added that he had been selling the materials meant for construction on the site to Hassan.

He stated, “I Have spent all my little savings in buying cloth materials for my wife during the Eid Fitri festival, so I am broke and I needed money to feed my family which pushed me into selling the 21 bags of cement to Hassan who I know specializes in buying stolen site materials in the area at the rate of #1,500 per bag on credit while he promised to pay me N31,500 by noon.

I invited Hassan to come see the cement and he agreed to come convey them in the early hours of the next day. In the morning, he came around 4:30 a.m., and he alongside Bukari Muhammad loaded the cement into his pick-up van and drove off.“My boss is owing me N75,000 as salary arrears, I thought selling the cement won’t be a bad idea as the move would help save them from getting spoilt,” he added.
The suspects have been transferred to the State  Criminal Investigative department (SCID), Panti for further investigation