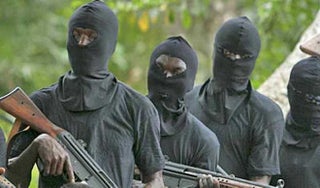 The President of the Students’ Union Government of the Plateau State University, Mr Ezekiel Lutei, on Tuesday confirmed the rape of one of the institution’s female students by gunmen.

The gunmen had attacked the university located in the Bokkos Local Government Area of the state.

Luka, who said this in Jos on Tuesday during a chat with our correspondent, explained that the gunmen also dispossessed some students of their cash and valuables including phones.

He said, “What happened was that there was a rehearsal for a play production by some 200 level and 400 level students of the Theatre Arts Department at the Open Air Theatre.

“While the rehearsal was going on, the gunmen stormed the place around 10 pm on Monday and attacked the students. In the process, one female student was raped while others sustained injury.

“Several others had their belongings including phones and money forcefully taken away before the gunmen escaped. This is not the first time students would be attacked in the university by gunmen and there is the need for those concerned to secure the lives our students to avoid further occurrence”

The SUG President said that the raped victim had been rushed to the hospital for medical attention, adding that the matter had been reported to the school authorities.

Fidelity Bank receives awards for its support for the real sector