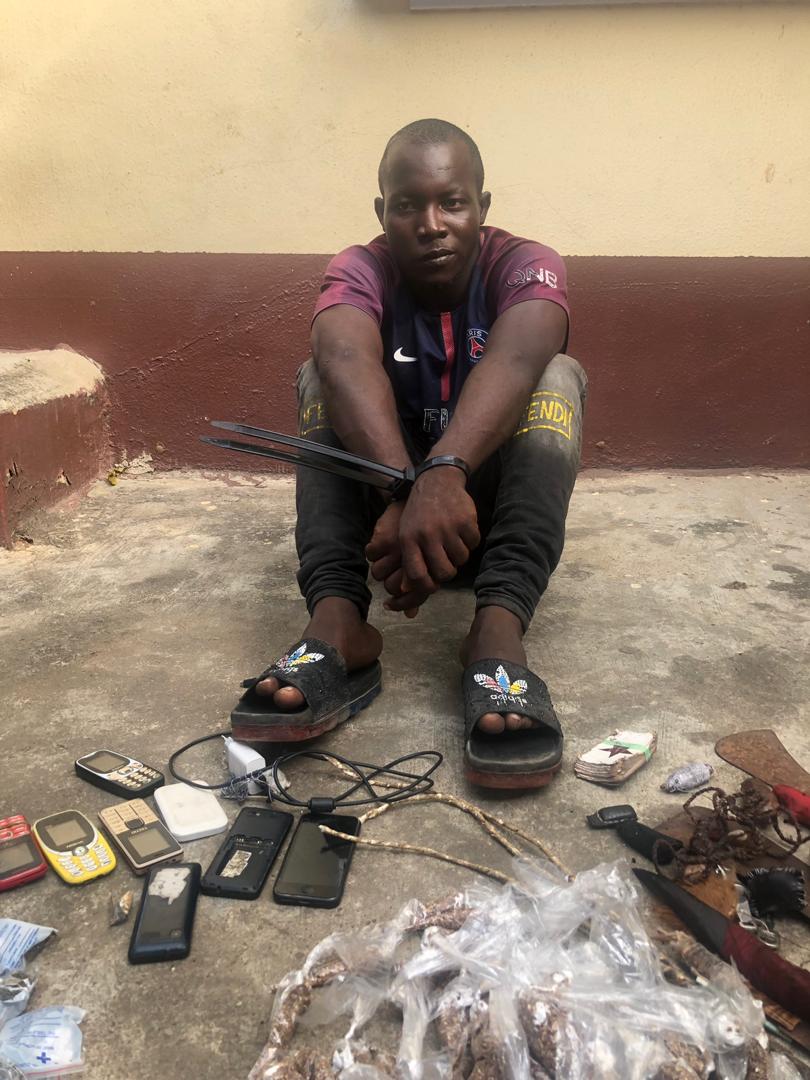 The suspects, Olukoya Ayodele (26) and Victor Godwin (30), were  arrested  following an  intelligence gathering by officers  of the Decoy team of the RRS, who were mandated  to uncover illicit drugs being distributed in the area.

The suspects in their confessional statement told the police that they buy and hawk different types of had drugs such as, Indian Hemp, Skunk, Tramadol, Refnol, Diazal and other assorted hard drugs to factory workers in the area.

Ayodele, an acclaimed graduate of Information Management and a notorious member of the Black Axe Confraternity (Aye) was arrested with all sorts of charms which he claimed he used in protecting himself from the harm of other rival cult members back then in his days as a student.

The suspect narrated that “I armed myself with all these assorted charms to protect me from getting killed by other rival cult groups. I got the ‘account’ of charm making from my father who is an herbalist. It makes it easy for me to prepare various charms for myself and friends.”

“I came to Lagos after I graduated in 2015 in search for greener pastures to come and work as a factory worker but the work was too stressful for me. I later began to work as a motor boy in same area  and added drug peddling to it to augment the low income from the motor boy hustle.”

“I make over N3.6m annually from the sale of hard drugs and have been in the business for three years now. The charms also helped me to transact my business and prevented me from getting caught by security operatives as the charm shielded me from various arrests that had been carried out in the area even when I was a bad boy”

In his own account, Victor,  a boutique owner in the area, was caught with hard drugs which he claimed he used  in supplementing his income from the boutique business.

Victor claimed he has been in the business for some time now and that  he has been using the proceeds from the illicit business to pay his rents and that  he was planning  to get married soon, which he believed his boutique income could not take care of.

“I sell hard drugs to factory workers in the area. They use it to work because their work is energy consuming and requires agility. I sell one capsule of tramadol for N300 while Indian hemp and skunk goes for N100 respectively. Drug business is a lucrative one because it helps make ‘sharp sharp’ money, but I regret my involvement in the illegal business,” Victor said

When briefed on the outcome of the raid, the Lagos State Commissioner of Police, Muazu Subaru, advised youths to be creative and energetic, and not to get themselves involved in illegal ventures. He also urged them to stay away from the sale and use of hard drugs

The suspects have  been transferred to the narcotic section of the Command for further investigations.