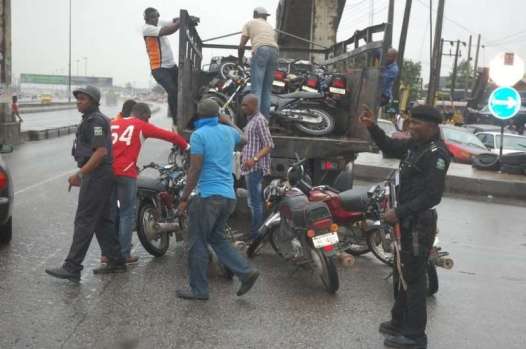 On February 3, commuters in Lagos wore long faces as they came to terms with the impact of the state government’s decision to restrict the movement of commercial motorcycles (popularly called Okada) and their tricycle (Keke) counterparts from major roads and highways in the state.

Hundreds of people, stranded at bus stops, were forced to trek long distances in the absence of their usual means of transport.

The Lagos State government on February 1 began the enforcement of the Lagos State Transport Sector Reform Law 2018, banning the use of motorcycles and tricycles on major highways within the state.

What the law says
The Lagos State government, under the administration of former Governor Babatunde Fashola, enacted The Lagos Road Traffic Law in 2012 which, among other things, restricted the operations of commercial motorcycles in at least 492 roads across the state. Section 3(1) of the law stated that ‘No person shall ride, drive, or propel a cart, wheelbarrow, motorcycle or tricycle on any of the routes specified in Schedule II to this law.’

There were protests to the law, followed by a massive crackdownon commercial motorcyclists in the days and weeks that trailed the enactment of the law. However, a few years later, and with another election cycle – the general elections in 2015 – in the horizon, the enforcement of the 2012 law petered out.

In 2018, and in a bid to provide solution to the chaotic transportation system, the Lagos State House of Assembly passed the Transport Sector Reform Bill. The bill harmonised the Vehicle Inspection Office (offences and penalties), traffic offences and penalties, and the Lagos Bus Services Limited among others.

The new law has clear provisions aimed at maintaining sanity on Lagos roads and enhancing the safety of commuters. It also included punishments and fines applicable to various traffic offences.

In Section 15(1), it amended the earlier law thus: “Subject to the provisions of Section 46 of this Law, motorcycles above 200cc engine capacity are exempted from the restriction on the use of motorcycles on the state highways.”

According to Section 46(1) of the law, “As from the commencement of this Law, no person shall ride, drive or propel a motorcycle or tricycle on a major highway within the state.” It further says that any person who violates the law – the passenger is also culpable – is liable on conviction to three imprisonment and his motorcycle or tricycle forfeited to the state government.

What the lawyers say
A Lagos-based human rights lawyer, Ebun-Olu Adegboruwa, said the partial restriction on motorcycles and tricycles in some areas of Lagos state is in accordance with the extant traffic laws of the state.

“The law has been in force and what has just happened is the enforcement of the law,” said Mr Adegboruwa, a senior advocate of Nigeria.

Although the law exempted motorcycles with engine capacity of 200cc (cylinder capacity) and above from restriction, Mr Adegboruwa said there was no part of it that permits hailing bikes.

Another lawyer, Abdul Mahmud, said if the law as enacted by the Lagos State House of Assembly prevents the state government from implementing restriction around certain motorcycles with 200cc capacity, then there is a problem with the regulation.

“What we have is a state that enacts laws and goes ahead to break its own laws and this act does not show responsibility.”

Mr Mahmud said the traffic laws are very clear and that if one puts a motorcycle on the road, the law provides safety mechanisms such as riding with a helmet, not carrying more than one passenger and others.

He urged the transport unions to approach the courts and challenge the ban.

“It is irresponsible of any state government to ban the means of transport in a mega city like Lagos where the public transport system is almost non-existent.”

Mr Ogungbeje said since the law provided conditions for exemption, enforcing the law against those that have met the conditions is illegal.

“That restriction is a clear violation of the rights of Nigerians,” he said.

“You cannot restrict people’s freedom of movement. If any law is at conflict with the constitution, that law will be declared null and void according to Section 1, sub-section 3.”

The bike-hailing business
To manoeuvre the law’s specification on the engine capacity of motorcycles allowed on the highways, bike-hailing companies launching in Lagos rolled out their operations with motorcycles above 200 cylinder capacity. The first to arrive was Max.Ng, around 2015, followed by Gokada, Safeboda, and O’Ride.

Ridwan Olalere, the Senior Director of Operations at O’Pay (O’Ride’s parent company), told PREMIUM TIMES that they ensured their riders complied with all government laws as well as traffic laws and all safety precautions.

“Our motorcycles are above 200cc capacity and the riders undergo training for two weeks before they are tested for riding,” Mr Olalere said.

“O’Pay is in conversations with the government and relevant stakeholders. We believe the Lagos State government will make the right decision by supporting businesses that have employed thousands of Nigerians and provided a solution for safe and secure transportation in the city.”

State government reacts
On Gokada’s website, the company states that ‘Unlike regular Okadas, Gokada bikes are all above 200cc. This means they are allowed to travel on all major roads, bridges, and highways.’

But Gboyega Akosile, the Chief Press Secretary to Governor Babajide Sanwo-Olu, insisted that the government had not violated any part of the law.

“There were individuals that sat down at that time to write that law at that time based on the prevailing circumstance at the time,” said Mr Akosile.

“Based on circumstances that we find ourselves, the government also has a responsibility to make pronouncements especially in the interest of the safety of the people.”

When asked about the section of the law that exempted motorcycles with 200 cylinder capacity and above from the restriction, Mr Akosile said that part of the law was not meant for commercial motorcycles.

“We are not addressing non-commercials, those that use their motorcycles for dispatch are exempted. But commercial motorcycles are not exempted,” he said.

Mr Akosile said the pronouncement was carefully considered by the government with the help of an attorney general who is a Senior Advocate of Nigeria and other learned colleagues.

“No responsible government will fold its arms and watch a group of people come to Lagos with no means of livelihood than bring in Okada as they are coming in, thousands of them every day.”
Source: Premium Times