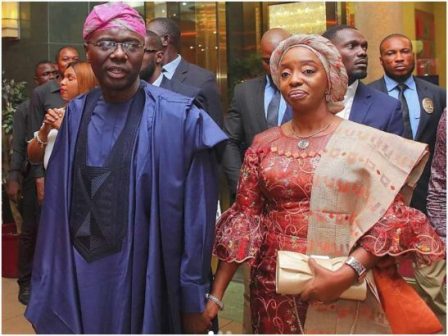 Wife of the Governor of Lagos State, Dr Ibijoke Sanwo-Olu, says she weeps over women plights and marginalisation not only in Nigeria but in the entire Africa.

Sanwo-Olu expressed the concern on Saturday at a one-day seminar and inauguration of the Lagos State Chapter of SHE COOPS Nigeria, an NGO for women empowerment and participation in cooperatives.

The News Agency Agency of Nigeria (NAN) reports that the NGO was initiated in the state by Dr Appolonia Eke, the Executive Director, Amazing Care Foundation, who is also the state coordinator of SHE COOPS.

Sanwo-Olu was represented at the event by Mrs Roseline Idimogu, the Wife of a Lagos State lawmaker, Mr Jude Idimogu, representing Oshodi-Isolo II.

She said that women must be empowered for the society to move forward.

” I have seen the plights of women especially the underprivileged ones; if you go to the remote areas, you will see what women are going through.

“When we go to some parts of Africa, where women are going through serious marganisation, I weep.

“The species, called woman, has passed through torture by humanity, and being a woman, I feel I have to contribute to improve their lot.

“They are a unique set of people, who when armed with skills and abilities, can change the world. I will like to see every woman in Nigeria have a voice,” Sanwo-Olu said.

Sanwo-Olu called for education of the girl-child and other women, saying that their education would reduce poverty.

She described women as pillars of the home and society, hence the need to give attention to their empowerment.

The Country Programme Manager of SHE COOPS, Mrs Grace Adeola, said that the inauguration was aimed at building a better world for every woman.

Adeola urged women “to come together as a cooperative”.

She called for massive empowerment of women to bring real change to the world.