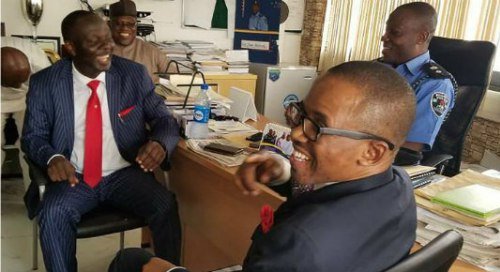 “At the Police Headquarters to present myself as a responsible Nigerian who was never on the run,” the former Edo State commissioner for information wrote on Facebook.

He was accompanied by his lawyers.

Mr Afegbua was invited to answer questions over a statement he released on behalf of his principal on Sunday calling on President Muhammadu Buhari not to seek re-election in 2019.

In a bizarre twist, another statement was released by Babangida, denying content of Afegbua’s statement.

Afegbua, however, stands by his original statement, insisting that the former military ruler authorised it before it was released.

Declaring Afegbua wanted on Monday, the police accused him of “making false statements, defamation of character and for an act capable of instigating public disturbance throughout the country”.

He was advised to report to the nearest police station anywhere in the country.

Meanwhile, Afegbua has sued the Nigeria Police Force, the Inspector-General of Police and two media houses for alleged harassment and persecution over a statement he issued on behalf of Babangida.

Afegbua, in the suit marked FHC/ABJ/CS/129/2018, which was filed before the Federal High Court in Abuja on Tuesday, asked for N1bn as damages for the breach of his fundamental human rights.

OLAMIDE’S SCIENCE STUDENT: “Why we have not banned the Video”– Censors Boards reveals