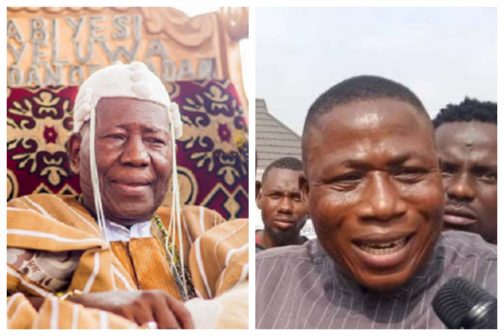 Yoruba monarchs in Benin Republic have resolved to petition their country’s leader, President Patrice Talon, over the arrest and ongoing trial of Nigerian Yoruba nation agitator, Sunday Igboho in the French country.

The monarchs took the decision at a meeting they held at the palace of Aladjohoun of Adjohoun on Sunday.

BBC Yoruba quoted the monarchs as saying that aside the President, they will also write to the Ministers of Justice, Internal Affairs as well as the head of parliament in Benin Republic.

The monarchs said they will only address the media after the submission of the petitions.

They also said they will not disclose the content of their petition as doing so may be counterproductive to their efforts and desire.

Ọba Siyan, the Aladjohoun of Adjohoun added that the traditional rulers will visit Government’s House on Monday if they did not receive a swift response to their petitions.

The meeting of the monarchs come ahead of resumption of trial of Sunday Igboho on Monday at the Court D’Appeal, Cotonou.

The Court had adjourned Igboho’s case after the Yoruba agitator who was arrested alongside his wife, Ropo on Monday, July 19, 2021, by the International Criminal Police Organisation at the Cadjèhoun Airport in Cotonou, Republic of Benin on their way to Germany was arraigned last Thursday.

Ibrahim Salami, one of the lawyers of Igboho in Benin Republic said the Yoruba agitator was arrested based on the request of the Nigerian government.

He added that the Nigerian government told the court last Thursday that Igboho is wanted for over allegations of trafficking in arms, inciting violence and plotting for division of Nigeria.

But Salami said Nigerian government has not provided evidence of the allegation against Igboho to the court.

He also said the Nigerian government cannot request the extradition of the Yoruba agitator to Nigeria, Salami said this was because Nigeria did not have extradition treaty with the Republic of Benin.

He added that the court may decide on the fate of Igboho on Monday.

Mr Adeola Oloko, Personal Assistant/Director of Media and Publicity to the Olubadan, made this known in a statement issued on Sunday in Ibadan.

Oloko quoted the royal father as stating this in his palace while exchanging views with leaders of Central Council of Ibadan Indigenes (CCII), led by the President-General, Mr Yemisi Adeaga.

The Oba, who did not disclose the identity of members of the delegation, said that they would be in court in Cotonou on Monday to observe Igboho’s trial.

He said that the step taken had become necessary in order to assure those who had been besieging his palace, including protesters, that he was not folding his arms over the travails of Igboho and his aides.

“Sunday Igboho lives in Ibadan, got married in Ibadan, reared his children in Ibadan, built houses in Ibadan and, as such, he has the right to be protected by Ibadan traditional institution within the ambit of the law, just like any other resident of the city,” he said.

Adetunji, who said that he was in constant touch with other traditional rulers in Yoruba land, including the Igboho royal crowns, allayed the fears of a repeat of Yoruba-Fulani collision of 1814.

He, however, urged people to remain calm and be law- abiding, stressing that truth would prevail.

Kidnappers In FCT Begin Collection Of Ransom Through Banks