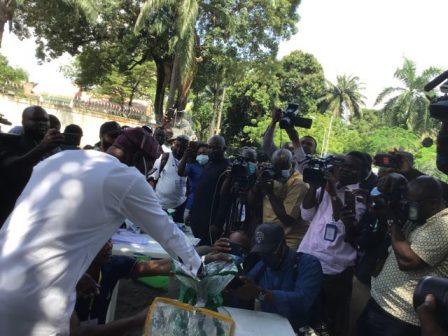 Lagos State Governor, Babajide Sanwo-Olu on Saturday said some people are working behind the scenes to secure the release of Yoruba Nation agitator, Sunday Igboho.

Igboho was arrested in Cotonou, Benin Republic last Monday while he was about to board a plane to Germany.

Sanwo-Olu, who fielded questions from newsmen was asked what the Southwest governors were doing to secure the release of Igboho.

The governor replied that people were working behind the scenes for his release.

He said the governors would not be able to come to the public to announce what they are doing on Igboho’s matter.

Meanwhile, Sanwo-Olu voted at his polling unit 019, ward 09, Ikoyi on Saturday, saying the Local Government poll in the state has been peaceful so far.

The governor arrived his polling unit with his wife, Ibijoke around 11:03am and voted few minutes later.

He said reports so far indicated that the poll had been peaceful, but decried low turnout at the poll.

Sanwo-Olu added that that the poll had been going on smoothly despite the challenges encountered, with LASIEC officers coming late.

“We have noticed four polling booths around this area, I will not say it is crowded, but things are going on smoothly.

”Report gotten is that things are going on smoothly except for few delays of officers coming out late,” he said, saying he hoped people would turnout massively.

Sanwo-Olu said the beauty of democracy was for people to express themselves openly through the ballot box.

He stressed the need for more advocacy to educate the people on the need to always exercise their rights by voting.