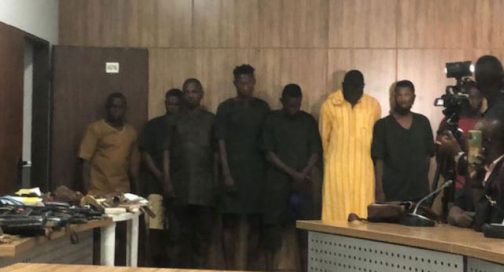 The Department of State Services (DSS), on Monday, seized a phone belonging to a Vanguard Photojournalist, Mr. Gbenga Olamikan, at the Federal High Court, Abuja.

The DSS operatives confiscated the phone following Olamikan’s bid to take snapshots of the 12 detained associates of Yoruba nation activist, Sunday Adeyemo, also known as Sunday Igboho, who were brought to court in compliance with the judge’s order.

The court, on July 23, ordered the DSS to produce detainees on July 29 and show cause why they should not be released on bail in accordance with the provision of Section 32 of Administration of Criminal Justice Act (ACJA), 2015 and other extant laws of the country.

The judge gave the order after Counsel to the applicants, Pelumi Olajengbesi, moved the ex-parte motion marked: FHC/ABJ/CS/647/2021 dated July 7 and filed July 8.

Egwuatu held that this would enable the court to inquire into the circumstances constituting grounds of their arrest and detention.

The judge, who granted the plea of the applicants, through the affidavit of urgency filed on why the matter should be heard expeditiously irrespective of the imminent court vacation, adjourned the matter until July 29.

However, the DSS also failed to bring the detainees before the court on the adjourned date.

Egwuatu, who expressed concern over continuous disregard to the court order by the security outfit, ordered that the 12 applicants be produced in court today.

But when the detainees were being conveyed into the court premises on the bus, photojournalists and cameramen from different media houses took position to take their photographs.

An officer on mufti drew closer to the Vanguard photographer and collected his phone.

The DSS operatives held the phone for over 40 minutes before it was released to the photographer.

This was after Olamikan’s colleagues intervened.

The operatives of the DSS prevented newsmen from taking photographs and videos of the detainees.

⁣❗️Our bedsheet /duvets are neatly packed in their  separate bags 💼