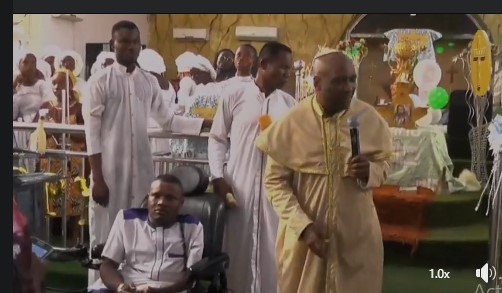 Popular prophet, Primate Ayodele has continued to extend his magnanimity to several individuals without putting into consideration their religion, tribe, beliefs or any form of differences.

Yesterday, during a live service at his church; INRI Evangelical Spiritual Church, a crippled Muslim faithful got the shock of his life when he was called out to receive a modern wheelchair worth N2 Million for free as facilitated by a church member, Mrs Buchi Anene

It was indeed an emotion moment for the Muslim faithful who has been left with no option than to make use of the old wheelchair due to lack of funds and support from those he went to.

According to information, He has been to about 20 churches, mosques, Muslim clerics and pastors to solicit for help on his wheelchair but never got any till God’s favour found him at INRI Evangelical Spiritual Church.

While receiving the gift, He started by reciting some verses in the holy Quran and continued with songs of praises to God. At some point, he became teary while appreciating God, Primate Ayodele and Mrs Buchi Anene who facilitated the precious gift.

His mother who was among the congregation couldn’t hold her joy as she ran out of her seat to appreciate Primate Ayodele and Mrs Buchi Anene for the kind gestures towards her son.

Primate Ayodele’s church has over the years become a place where the hopeless gets hope, the less privileged gets empowered, it has been more of a charity organization due to the many millions of naira that has been invested into empowerment of all kind.

⁣❗️Our bedsheet /duvets are neatly packed in their separate bags 💼