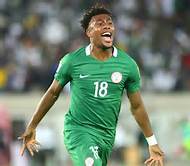 Kelechi Iheanacho menacing free-kick, Alex Iwobi brace and Amkar Perm versatile defender Brian Idowu scored on his debut as the Super Eagles came from behind to beat two-time world champions Argentina 4-2 in an international friendly in Krasnodar, Russia, on Tuesday.

It was the second time the Eagles would beat their more illustrious opponents, and Gernot Rohr’s team did it in clinical fashion.

The Nigerians fell behind to the star-studded Argentines in the 28th minute after goalkeeper Daniel Akpeyi committed a costly blunder, inexplicably handling the ball outside his box, when he should have kicked it away. Sevilla midfielder Ever Banega tucked in the resultant free-kick, as the 31-year-old Chippa United keeper looked on miserably.

The South Americans doubled their lead through Sergio Aguero, the Manchester City striker converting Cristian Pavon’s cross past Akpeyi and the outstretched legs of Williams Troost-Eking and Ola Aina.

The goal, his 36th for the Albiceleste, makes Aguero the third-highest scorer in Argentina history after surpassing Hernan Crespo. The City man now has only Lionel Messi (61) and Gabriel Batistuta (54) ahead of him as Argentina’s all-time record scorer.

However, Leicester City’s Iheanacho reduced the deficit with a curling free-kick that saw the diving Argentine keeper parry the ball into his own net.

Arsenal’s Iwobi grabbed Nigeria’s equaliser in the 52nd minute after combining well with Iheanacho before the 25-year-old Idowu, who came on as a substitute, latched onto a pass into the box by the enterprising Iheanacho, beating his marker with a deft touch to put the Eagles ahead for the first time at the Krasnodar Stadium.

Iwobi then sealed a memorable win with the Eagles’ fourth goal in the 73rd minute. The Arsenal man, who was put through by Ahmed Musa, glided past a helpless Javier Mascherano and then fired in to give the three-time African champions one of their most emphatic victories in recent times.

The South Americans tried in vain to reduce the deficit but Uzoho, in for Akpeyi gave a good account of himself thwarting the efforts of the frustrated opponents.