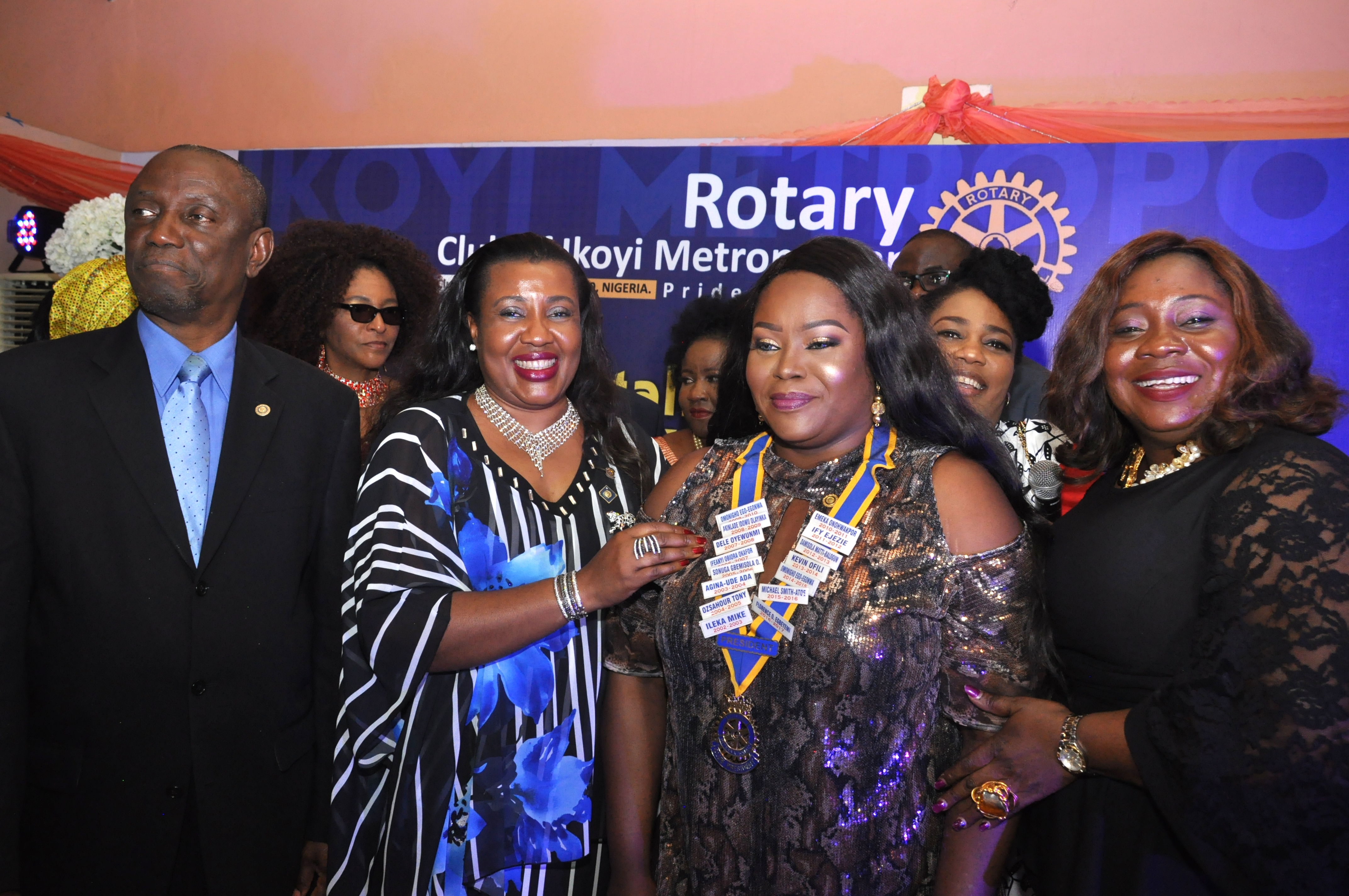 A financial expert and Executive Director of Heritage Bank Plc, Mr. Jude Monye has said that the world and indeed Nigeria will be a better place if everyone imbibes the spirit of giving and service to humanity for which Rotary Club is known across the globe.

Monye gave this charge when he delivered a keynote address entitled: ‘Giving’ at the official installation and fund raising luncheon of Rotarian Laurine Ngozi Ubanozie as the 16th President of the Rotary Club of Ikoyi Metropolitan, which took place in Lagos recently.

According to him, life will be better for all if everyone not only offers service above self but also subject such acts of giving and service to the four-way test and five avenues of the Rotary Club.

He described the act of giving to mean ‘Giving or offering service willingly without compulsion and without expectation’, insisting that all should support the good work of the Rotary Club in putting smiles on the faces of people, especially the less privileged by giving to support such humanitarian services of the Club.“No one is useless, who lightens the burden of others”, he said emphatically quoting Charles Dickson.

He also said: “Giving ensures that the human race is sustained, giving does not diminish the art of living rather it promotes social connections. We should therefore give not only in terms of funds but also in service to enhance and sustain the social wellbeing of the human”.

Monye, who was before now a Chief Risk Officer at Wema Bank Plc, Citibank Nigeria and Bank PHB, now Keystone Bank Plc respectively with over 26 years of experience in the banking industry commended the Club for it humanitarian services especially in the areas of preserving the environment, providing health and educational services, provision of water and sanitation, among several others and therefore urged Nigerians to support the Club in these humanitarian services.

Meanwhile, the outgoing President of the Club, Rotarian Florence Egbeyemi, in her farewell speech, said that Rotary is accountable and has integrity, insisting that every money donated to the club must be put into judicious use for the good of humanity and must be accounted for.

The Rotary President disclosed that during her regime under the 2016-2017 year, the club’s activities centred mainly on enhancing youth education as well as health services not only in Lagos but also in Ogun State.

She listed some of the core projects of the regime to include the donation of beds, bed spread and duvet, among others to the Ikoyi hospital, which had none then as patients were sleeping on the floor.

The Club also donated over 600 sets of chairs and desks to the Army Secondary School, Obalende while over 500 women were taken through cervical cancer checks and other medical tests during which it was discovered that some of them have advanced stages of Hepatises and HIV/AIDS, who are currently undergoing treatment at the expense of the club.

It was also gathered that the club donated over 200 units of rain boots and coats to operatives of the Lagos State Traffic Management Authority LASTMA, establishment of two interact chapters of the club in two secondary schools located within the Ikoyi-Obalende axis, having won the Presidential Award for the Rotary International, among several other laurels.

She thanked the other members of the board that worked with her for the team spirit they exhibited, which contributed significantly to the huge success recorded by the club under her leadership.

The newly inducted president, Rotarian Laurine Ngozi Ubanozie, in her acceptance speech thanked everyone that contributed in one way or the other to make the event successful, pledging that she would build on the successes recorded by her predecessor.

Rotarian Laurine Ngozi Ubanozie who is a Risk financial expert, currently the Relationship Manager of an international Collateral management Company, ACE GLOBAL DEPOSITORY GROUP, who joined the club in 2010, emerged the President elect for July 1, 2017, and is to pilot the affairs of the Club for one year during 2017-2018 Rotary year.

She hinted that the club under her watch would embark on an aggressive membership drive to ensure that it retains its succession plan, which might not be if new members were not admitted.

According to her, a target of 40 members has already been set for the next one year, disclosing that a total of 30 new members had already joined while five are concluding plans to join, thus leaving a balance of five new members, which must be delivered before the end of her tenure next year. The club has also executed her 1st project by collaborating with Pathcare Nigeria on a Health awareness campaign and free test exercise on the 29th August, 2017 at 22 Awolowo Road Ikoyi.

She also said that the club under her watch will focus on education, youth empowerment through vocational training and mentorship, elimination of the scourge of polio, building and equipping conventional and electronic libraries in secondary schools, donation of books and granting of scholarships to indigent students. She also said that the club star project will centered on Water and Sanitation projects thus will renovate the toilet and water facilities in Girls Secondary Grammar School Obalende for a start and mount the 4 Ways Test of Rotary bills boards in all the clubs Interact schools.

Other programmes include ecological preservation services under which it plans to plant trees to control pollution and flooding.

While pledging to adhere strictly to the Rotary tenets of integrity and accountability, she argued that Nigeria will be a better placed if the country is administered the way Rotary carries on with its activities.