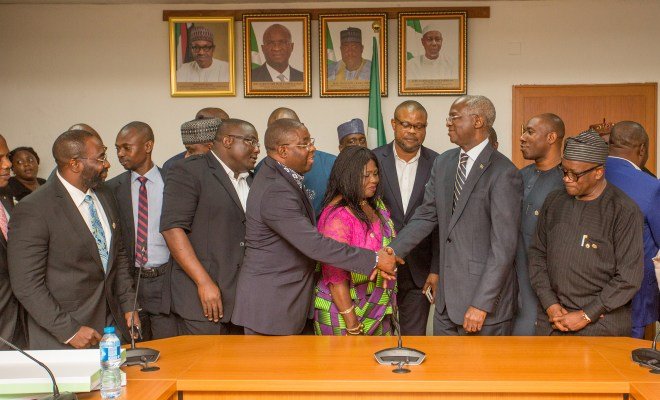 The Minister of Power, Works and Housing, Mr. Babatunde Fashola SAN, was on Monday presented an award of recognition by the Association of Indigenous Construction Contractors of Nigeria (AICCON) for the regular payment of Federal Government construction contractors in the last one and a half years even as the Minister described the development as one of the pointers to the Change philosophy of the administration.

President of AICCON, Otunba Lekan Osifeso, who led the Association on a courtesy visit and presentation to the Minister, said the award was in recognition and appreciation of the fact that for the first time in many years, the Contractors were getting paid after submission of their invoices without having to lobby anybody or come to the Ministry to canvass for it.

In his brief remarks before the presentation, Otunba Osifeso said, “There is none of our members working with the Federal Ministry of Works, for the first time in a very long time, who did not receive at least two payments last year and none of us came to the Ministry to talk to anybody or lobby anybody. So in that respect, Sir, we think you deserve an award and recognition”.

Receiving the award, the Minister, who thanked the Association for the gesture, expressed delight that some people appreciate the “modest” contributions the Ministry was making in rebuilding the country adding that while the gesture showed that there were right-thinking and well-meaning Nigerians who value service, it also challenged the Team to do more.

The Minister, who handed the recognition plaque to the Permanent Secretary Works and Housing, Mr. Mohammed Bukar, noted that every member of the team has a role to play in the work being done.  “Our sense here is to build a team and show that Change means something. So this is one of the things that Change means to us; that Contractors don’t need to lobby our government to get paid for the work that they have done and we will continue to do more of that”, he declared.

Earlier, while responding to the opening remarks of the AICCON President, Fashola commended the Association for the contributions they have made and are still making in the overall effort to rebuild the country, which, according to him, is at the core of President Buhari’s commitment and undertaking as made clear by the President in his New Year Address.

Fashola recalled that Mr. President had in his New Year Address made it clear that as part of its diversification strategy for the economy, his Government would be focusing, not only on Agriculture and Mining but also on Infrastructure adding that as already acknowledged by the AICCON President, the Executive Order Five issued by the President placed high priority on local content and local capacity, which, according to him, is where the Indigenous Construction Contractors come in.

He, however, observed that given the general conception and use of the word ‘Indigenous’, there was need to throw more light on the conception adding, “It is important to define who really is an indigenous company; because to the best of my knowledge, I doubt whether there is any company that is not registered under our laws that does business here.

He declared, “Unless we intend to change our laws, once you are registered as a Nigerian company with certain amount of shareholding, I think about 51 per cent, you are a Nigerian company. So with that background, who chooses the Managing Directors of the companies?

”Pointing out that if a Nigerian owns a company and takes a foreigner as Managing Director, it was not the responsibility of the government to choose that for him, the Minister told the Association, “So I think you should look into the mirror and ask yourselves some of these questions”, adding that some of the Nigerian owned companies register and employ foreigners as their Managing Directors while they sit as Chairmen with the role of leveraging business to the companies while the Managing Directors and Technical Partners do the execution.

“If a company registers and wins a bid to do construction work in the country, it was not in the rights of the government to now say it could not execute such project for any other reason other than it was not registered as a Nigerian company”, he said adding that even if there was such a provision, there was also the consideration for specialization.

Using the Medical and Legal Professions as examples, Fashola posited that there are certain projects that require specialized execution and would, therefore, need the handling of a company specialized in that area adding, “You cannot rule out specialization in any industry, even in football”.

“So let us understand that within the realm of open and competitive bidding, that certain specifications will require us to ask for certain specialization”, the Minister said adding that even among the members of the AICCON, there were differentiations in terms of experience and equipment.

The Minister, however, assured the Association of Government’s support in areas where they have capacity adding that government would appreciate it more if they get the right equipment . He noted that another area where massive scope exists for partnership was in the Maintenance sector where, according to him, the Ministry was already working on setting up a maintenance framework. “Whatever we build is built to a design life subject to certain types of maintenance and that is an area that we haven’t really done enough”, he said.

Fashola, who disclosed that the Ministry was working to develop a pilot maintenance framework starting with government buildings and from there build out, adding, “Hopefully may be in 2019 Budget, if we are lucky, we will be able to put a sizeable global Maintenance Budget for the first time and see how to engage labour and contracting companies to help grow the economy”.

Advocating improvement within the framework of the indigenous companies, the Minister declared, “You have to compete and you have to improve your capacity”, adding that in defining who was really an indigenous company, there was need for the AICCON to research the existing construction companies who, he noted, have Nigerians on their boards.

Earlier in his opening remarks, President of the Association, Otunba Lekan Osifeso, said the Association was on the courtesy visit to the Minister to both commend him for the paradigm shift within the construction industry under his watch in terms of regular payment of contractors, a situation which, according to him, was an experience coming after so many years.

Otunba Osifeso, who put the size of the Construction Industry in Nigeria at one Trillion Naira annually with the Federal Ministry of Power, Works and Housing contributing in excess of N200 Billion  annually, noted that unfortunately most of the sum was lost through capital flight as a result of non-patronage of local contractors over the years.

He posited that if the indigenous contractors were adequately patronized and made to participate increasingly in the industry, capital flight cases would drop by as much as 60 per cent and would boost the economy and increase employment opportunities within the country adding that it would impact the Gross Domestic Product of the country and boost government investment.

He declared, “Our mission is in line with Mr. President’s Executive Order Five that clearly supports the participation of the indigenous construction contractors by the government by way of commitment to patronage”, adding that on the long run, the Association’s aim was to build a formidable indigenous construction industry that is capable of attracting funding from financial institutions locally and internationally.

PDP urges National Assembly to sanction Buhari over $1b