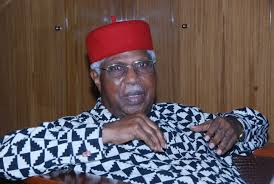 Agbaje, in a statement issued in Lagos on Tuesday by his Director of Media and Publicity, Felix Oboagwina, described Ekwueme’s death as a shocking and a personal loss.

“My party, PDP, has lost a selfless and quintessential founding father at a time we most needed his usually wise and defining counsel,” Agbaje said.

Recalling their last meeting in October, Agbaje said that Chief Ekwueme had looked the picture of health, when they exchanged pleasantries at this year’s Ikenga Awards where the former PDP Governorship Candidate for Lagos State received the Aka Ikenga Award for Excellence, the first Igbo non-indigene outside the South-East and South-South to receive the prestigious Igbo award.

“His Excellency was looking so alive and healthy that it comes to me as a personal shock and a personal loss to hear so suddenly of his death,” he said.

Commiserating with the deceased’s brother and the paramount ruler of Oko, Igwe (Professor) Laz Ekwueme, and the entire family, Agbaje prayed that God would grant them the grace to uphold the great name he left behind and the lofty principles he stood for.

Agbaje described Ekwueme as the gentleman of Nigerian politics and a quintessential professional Architect who became a strong voice for democracy.

According to him, Ekwueme had shown matchless courage by joining other eminent Nigerians to form the G-34 at a time when General Sani Abacha’s brand of military dictatorship made it extremely dangerous to identify with democratic principles.

“He will be remembered as a completely detribalised Nigerian who was an unapologetic advocate for justice and equity,” Agbaje said.