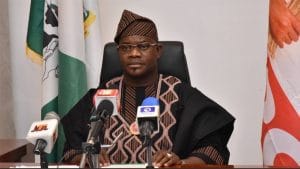 Governor Yahaya Bello of Kogi State has dissolved the State Executive Council, ahead of his second term inauguration which comes up January 27, 2020.

Bello, who dissolved the EXCO at a valedictory session on Wednesday in Lokoja, commended the members for their contributions to the development of the state since the inception of his administration.

Addressing the session of the Council after a meeting that lasted for 7 hours, governor Bello expressed his appreciation to Council members and other political appointees for offering themselves for the service of the state at a crucial period.

“I want to express my profound gratitude to all of you. I recognize and appreciate your commitment to the service of our dear state. You all have contributed immensely to the social contract we had with our people about four years ago.

“The modest actualisation of the ‘New Direction’ was a product of our collective efforts and determination to take our state to greater height.

“I want to wish every one of you and all other political appointees success in your future endeavours as I urge you all to remain committed to the development of our dear state.

“Your tremendous contributions are highly appreciated and I make bold to say that you all have done well in the discharge of your duties”, he said.

Meanwhile, the Governor retained some of his appointees and appointed others.