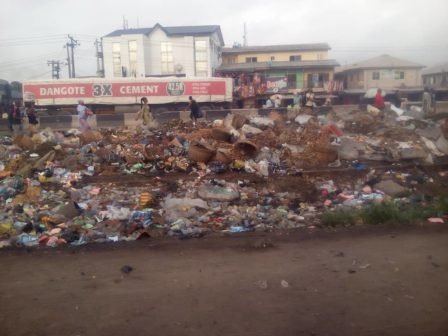 Lagos with a population of over 20 million people, generates waste in tens of thousands on a daily basis.

The huge amount of waste is not new considering the population and managing it was also not a problem in the past especially during Babatunde Fasola’s administration, when LAWMA and PSP Operators were charged with the responsibility of managing waste in the state.

It was a thing of pride for residents and visitors alike to live and drive in a state free of dirt. The environment and major roads were clean and Lagos was beginning to fit the mega city status.

But since late 2017, Lagos has taken a turn for the worse. Dumpsites are common sites to behold all across the state. And it is gradually becoming the signature of the city.

A drive through the city leaves one with so much to desire in terms of clean environment. From Mile 2 to Ijesha, Cele to Iyana Isolo down to Oshodi, the story is the same: dumpsites at every bus-stop.

Oshodi, the epicentre of the Lagos megacity initiative, where massive infrastructural development like World Class Transport Interchange, expansion of the Airport Road and construction of BRT Route on the Lagos – Abeokuta Expressway is also not free from the dumpsite menace.

Despite numerous promises from the state government and Visionscape Ltd to return Lagos roads to the good old days of dirt free city, the menace still stare at Lagosians everyday.

These dumpsites that litter the whole state bring out so much bad odour forcing passers by to cover their nose and one begins to wonder what it will be like when the raining season fully commence.

In an attempt to get reasons for the menace, our correspondent spoke with a Cleaner Lagos Sweeper who identified himself as Yusuf, he said his job is to sweep the roads while the truck drivers are the one’s to clear the waste. Yusuf said he doesn’t know how often the truck drivers come to clear the dumpsites around.

In a similar manner, a truck driver who sought animosity claimed that since the fire incident at the Olusosun dumpsite, most truck drivers who normally run two trips can’t do that anymore as the new dumpsite at Eruelepe in Ikorodu is far and outskirt of Lagos.

WE HAVE NO HIDDEN RELIGIOUS AGENDA IN OUR ADMINISTRATION – PRESIDENT BUHARI