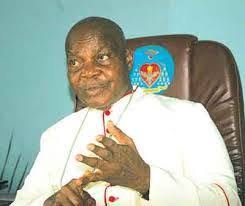 He said, “Nigerians are currently forced to watch a show of shame by the ruling party of today and the ruling party of yesterday. Such are accusations and counter-accusations of looting that Nigerians find it difficult to differentiate between the accuser and the accused.“Huge sums of money belonging to the people of Nigeria obviously got into wrong hands and for the wrong reasons. There are good reasons to suspect that the looting that took place cut across party lines. Nigerians deserve to know how, for example, the two leading parties financed their campaigns in 2015.“But instead of honest answers, we are treated by the two big parties to a theatrical display of politically-motivated compilation of lists of looters. We are forced to say what Jesus said to the accusers of the adulterous woman in the Gospel: whoever has not sinned let him cast the first stone.”

He noted that insecurity affects all, irrespective of party, ethnic, religious lines, social and economic status.

“Unfortunately, it can and it ought to be said that our political leaders constitute the greatest threat to security in this country, not armed robbers nor kidnappers, not Boko Haram nor herdsmen.

“Nigerians are impoverished by those who are put in charge of her enormous resources while our political leaders live in affluence. The standard of living continues to nosedive. And while politicians display ill-gotten wealth at birthday and wedding parties, there is widespread dilapidation of infrastructure.

“Our government got a friendly reminder recently. Counselled to invest resources in the people of Nigeria, its apologists, as usual, insulted the messenger. Has Bill Gates become a ‘wailer’ and a looter as critics of this government are often labelled?”

The cleric added, “Instead of indecently jostling for positions in 2019, the immoral electioneering propaganda that has replaced good governance, and the vicious fight over whose turn it is to capture the pot of honey that Nigeria’s wealth is, our politicians across party lines should stop and ponder: what type of Nigeria are we handing over to our children and to our children’s children?

“Whether our political leaders in all the parties will seek wise answers to that question is left to be seen. That is why we are still watching and waiting.”

“This same ‘degraded’ Boko Haram cruised in a convoy into Dapchi, abducted over 100 young schoolgirls without the Nigerian Army firing a shot; cruised back a few days later to return the girls; again, the Nigerian Army was nowhere to be found