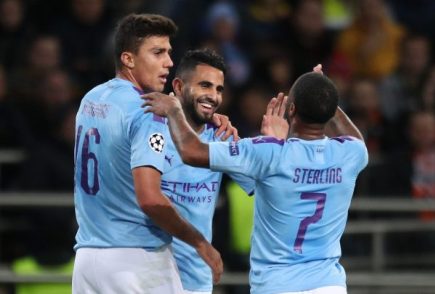 City are the defending champions and remained on course to lift the League Cup for a third successive season.

Pep Guardiola’s side were given a stern test on a wet and windy night at a noisy Kassam Stadium but two goals from Raheem Sterling eventually saw them through.

On their part, Manchester United were frustrated for 51 minutes at Old Trafford by fourth-tier Colchester United.

But England striker Marcus Rashford broke the resistance and an own goal by Ryan Jackson and one for Anthony Martial took the hosts to a 3-0 win.

Manchester United manager Ole Gunnar Solskjaer said of the two-leg games with City in January:
“Fantastic days in Manchester. You always want to win trophies and games and we have a nice little draw coming up. Exciting times ahead.”

Meanwhile, Leicester City squandered a 2-0 lead to draw 2-2 at Everton but moved through to the semi-finals after Jamie Vardy scored the decisive spot-kick in the penalty kick shootout.

Brendan Rodgers’s side will face Midlands rivals Aston Villa in the semi-finals after Villa beat a virtual Liverpool youth team 5-0 on Tuesday.

Liverpool’s senior players were all in action on Wednesday in their FIFA Club World Cup victory over Monterrey.

Manchester City have dominated the League Cup under Guardiola but rarely have they been tested quite like they were by Oxford United.

Mikel Arteta, favourite to get the vacant Arsenal job, took his place next to Guardiola on the Manchester City bench in what could be his final game as assistant manager.