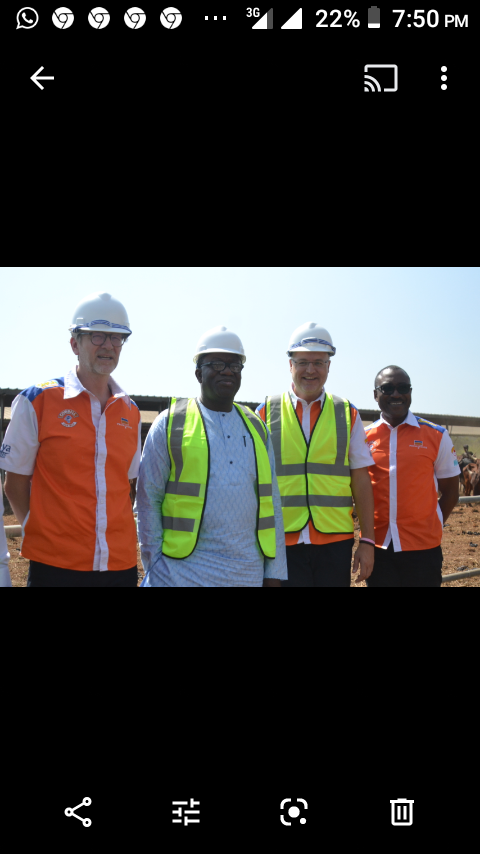 He was accompanied by top management of Promasidor Nigeria which includes the Managing Director, Anders Einarsson, Director, External Relations, Andrew Enahoro and Senior Manager, Finance, Yomi Adenson, who were on a two-day visit to the Government House in Ado- Ekiti on Monday, December 16.

Also among them was the Special Adviser to the Governor of the Central Bank of Nigeria on Development and Finance, Anthony Ifechikwu

Having hosted Promasidor team to a sumptuous dinner on Monday evening at the government house, the governor of Ekiti State, Dr John Kayode Fayemi on Tuesday together with Olivier and his delegation went on an inspection tour of Ikun Dairy Farm in Ikun Ekiti.

It is of note that, the Governor had earlier inaugurated the Board of Directors for Fountain Holdings Limited, the principal investment company of Ekiti State at the state house before he embarked on a one and half hour journey to Ikun Dairy Farm (IDF).

The visit by Olivier was in furtherance of the Memorandum of Understanding signed in July this year in Abuja by Einarsson and Governor Fayemi for the company’s backward integration initiative in the dairy sector. This is in line with the Federal Government’s policy that companies should source for local raw materials for their products to prevent an over dependence on foreign/ imported goods.

Speaking at the occasion, Olivier expressed delight at the partnership which has been seamless and his strong resolve in ensuring an enduring relationship with Ekiti State.

He said Promasaidor, as the makers of quality products such as Cowbell Milk, Loya Milk, Cowbell Chocolate, Miksi Milk, Top Tea, Onga Food Seasoning, Sunvita Cereals, and others, local source of milk collection is paramount to ease much dependence on foreign raw materials.

The Promasidor’s Chief stated that the company would ensure maximum exploitation of the farm’s potentials with the competent personnel who have been working earnestly to ensure successful operation.

He mentioned that the commitment towards resuscitating the farm has prompted the enormous work already done and with the purchase of over a thousand cows which are being fed and prepared for milk supply.  “With the installation of up-to-the-minute equipment and zeal in attaining our backward integration goal, we hope to have an edge over competitors in the dairy industry,” Olivier affirmed.

Explaining to Governor Fayemi and his team how the equipment at the farm are used, Einarsson promised that work would be completed soon for a robust operation.

He reiterated Promasidor’s preparedness in creating a viable economic base for Ekiti State through employment opportunities and the formation of small and medium enterprises from the positive impact that will ensued.

In his remark, Governor Fayemi expressed delight at the company’s eagerness in its source for raw materials and promised immense support in its resuscitation plan.

He said the farm which will produce over 9,000 litres of milk per day will enhance the agro-allied nature of the state and will contribute to the growth of the state’s economy as subsidiary companies will emerge. This, according to him, will create employment opportunities for its citizens.

Governor Fayemi affirmed that the partnership with Promasidor Nigeria would further be strengthened through Fountain Holdings for mutual benefit.

According to him, Ekiti citizens want to see the milk processing plant function soon because of its economic benefit which would have significant impact on their standard of living and wellbeing through job and wealth creation.

Eulogising the momentous progress made by Promasidor, Ifechikwu pointed that it is the most practical step ever made by milk producing companies in the country. He expressed satisfaction at the level of work and urged the company to continue in such stride.

Located in Ikun-Ekiti, in Moba Local Government Area, Ikun Dairy Farm spans across 1,000 hectares of land area and was established in the early 1980s with hundreds of fattened cows as an integrated agro-allied farm to boost the state’s economy.