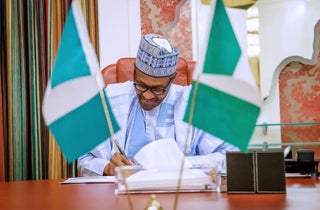 Here is what you need to know about the appointees.

1. Doyin Salami
He is a senior lecturer at Lagos Business School where he leads sessions in the economic environment of business. He has also served as director of programmes for five years until January 2005.

He served as member of the Monetary Policy Committee of the Central Bank of Nigeria and had been a member of the Federal Government’s Economic Management Team.

3. Chukwuma C. Soludo
The former CBN governor was born on 28th July, 1960, and hails from Aguata Local Government Area of Anambra State. After his secondary school education, he proceeded to the University of Nigeria, Nsukka, where he graduated with a first class degree in Economics. He also undertook his postgraduate and doctorate degrees in Economics from the same University winning on both occasions, the prize for the best graduating student.

Mr Soludo, a professor, had cumulative four years of post-doctoral training in some of the world’s most prestigious institutions, including: The Brookings Institution, Washington, DC; University of Cambridge, UK, as Smuts Research Fellow and Fellow of the Wolfson College; the UN Economic Commission for Africa as a Post-Doctoral Fellow; University of Warwick as a Visiting scholar and Visiting Research Scholar at Center for African Economies, University of Oxford (with funding by the Rhodes committee). He also attended over a dozen specialized courses and has had extensive research, teaching and consultancy works in different areas of economics.

He has worked at the World Bank both as a short and long-term consultant since 1993 and also at the United Nations Economic Commission for Africa, Addis Ababa.

4. Sheu Yahaya
Prior to his appointed as the Chairman of the Board of Directors of Development Bank of Nigeria Plc (DBN) in March 2017, Mr Yahaya was the Bank’s Interim Managing Director.

He has an outstanding career in Academia and Development Finance, having held several management and executive roles, including Executive Director at the African Development Bank and member, Monetary Policy Committee of the Central Bank of Nigeria.

Before joining the African Development Bank, he served as Deputy General Manager at Nigeria Export-Import Bank (NEXIM). He was a lecturer in Macroeconomics at the Department of Economics in University of Sussex, UK and Head of Economics Department in Bayero University kano, Nigeria.

5. Ode Ojowu
Ode Ojowu (born August 16, 1948) is a Nigerian economics professor and a former Chief Executive of the National Planning Commission. He was also Chief Economic Adviser to Former President Olusegun Obasanjo between 2004 and 2005.

He has held positions at the International Monetary Bank, the World Bank, and the United Nations Development Programme .He was a professor of economics at the University of Jos.

In 2008 Ojowu was appointed head of the governing council of the Benue State University.

6.Mohammed Sagagi
Mr Sagagi has a Certificate Course in Making Markets Work for the Poor from Springfield Center, Durham UK; PhD (Economics) from University of Warwick, Coventry, England (1985) with thesis on Commercial Policy and Industrialization in Nigeria; and M Sc. (Economics) from the University of Warwick, Coventry, England (1981).

He bagged his B Sc. in Economics with First Class Hons. from Ahmadu Bello University, Zaria, Nigeria in 1977. He serves as Political Economy and Government Relations Adviser at a DFID-funded Programme on Skills Development and Entrepreneurship (Mafita) in Northern Nigeria.

He is an Economist and Development Consultant with a strong academic background and extensive private sector experience in Nigeria. His expertise and ability to carry out research, conduct diagnostic studies, design interventions as well as formulate practical development strategies.

According to his details, he has interests in political economy and sustainability of interventions- and play crucial roles in ensuring that Political Economy and sustainability issues are (a) integral to design and (b) part of the day-to-day management of all interventions. He has participated in a number of Federal, State and Local Governments of Nigeria reform programmes.

She has worked with the International Monetary Fund since 2003 in Washington D.C. Metro Area. According to her, the assignments in more than 10 emerging markets (Asian and African countries) focus on comprehensive economic management including: (i) policy reform advisory services and dialogue with governments (ii) financing and lending programs; (iii) analytic research and economic modeling and forecasting. Specifically, she helps design for national governments and central banks, implementable solutions specific to their circumstance.

She also ensures that key economic and financial policy reforms are focused on fiscal and debt sustainability; foreign reserve adequacy; improving the transmission mechanism of monetary policy; achieving depth, safety and soundness in the financial sector; and managing capital fl

She worked at Central Bank of Nigeria’s Research Department between 1998 and 2003. She also worked with the World Bank between 1997 and 1998 as well as the IRIS Center, University of Maryland at College Park as a consultant.

She is the immediate past IMF Representative for Sierra Leone.