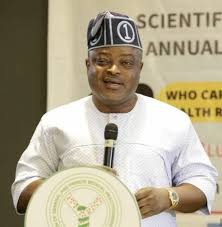 The Speaker of the Lagos state House of Assembly, Mudashiru Obasa, is one whose impact in the Lagos State Government can never be overemphasized considering his contribution to its development.

He has been very instrumental in the progress recorded in Lagos State, ensuring accountability on the part of the executive arm and total improvement in all sectors of Lagos economy as a whole.

Obasa started his political career in 1999 after contesting for the seat of a councilor at Agege Local Government under the Alliance for Democracy (AD) and won.

Not many know that the speaker, Obasa, is a lawyer, but according to information, never practiced after receiving a bachelor degree in Law from the prestigious Lagos State University (LASU) in 2006. It’s quite alarming that a man, who was at the top of his law goal after graduation, decided to drop it for the sake of politics, which is merely a service to humanity.

Also, several governments have worked with this excellent lawmaker, yet his strictness, transparency, humility has stood Obasa out often times. He has also been able to get them on their toes with his strict adherence to details and compliance to rules and regulations.

Recently, during the Covid-19 crisis that has struck the world, Obasa ensured that Lagosians, especially in his constituency are well fed through several palliative packages that were second to none in the state. And the palliatives which received several accolades, even from his fellow lawmakers, include cash, rice, bread, other palliatives to mention a few, in other to ameliorate the untold hardship of his constituency.

At this juncture, it is worthy to reveal that Rt. (Hon) Mudashiru Obasa is the chairman of the conference of speakers In Nigeria, the post bestowed on him by other speakers, who have individually sized up his capabilities and discovered that this lawmaker is worthy of being their leader.

Without mincing words, he has been a very good custodian of law as enshrine in the 1999 constitution and good governance in the Centre Of Excellence over the years and should be well appreciated for his contribution towards the country’s develpment.

Catholic bishop: COVID-19 will expose businessmen who pose as pastors