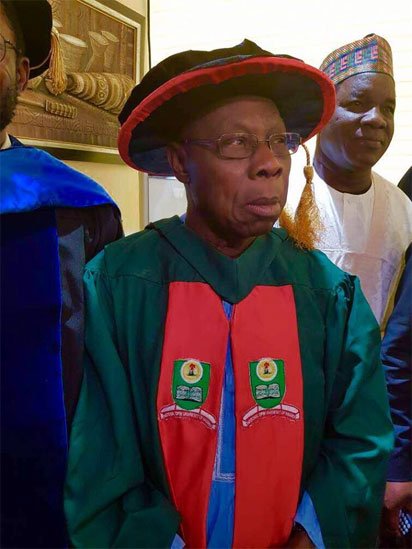 Obasanjo who was among the 14, 769 graduands, was conferred with Doctor of Philosophy in Christian Theology, thereby making him the first PhD product of NOUN. Out of the number, 41 bagged first class honours.

Represented by Prof. Abubakar Raheed, Executive Secretary, National Universities Commission (NUC), Buhari said that it was Obasanjo’s belief in Open and Distance Learning (ODL) that made him enroll in NOUN. “Obasanjo, because of his quest for quality education, could have opted to fulfill his desire for university education in Ivy League universities of the world and none of them could have denied him this opportunity. “NOUN and indeed Nigerians, will continue to appreciate your belief, recognition of and support for ODL in Nigeria; we are proud of you,’’ he said. Buhari said that his administration desired that Nigerian universities, irrespective of their mode of delivery, would deliver on national needs and aspiration as well as be strategically positioned to compete internationally. The visitor said that as a result of the centrality of the curriculum in the delivery of quality university education, he had charged NUC to ensure periodic review of Nigerian university curriculum. Earlier in his address, Prof. Abdalla Adamu, NOUN’s Vice-Chancellor said 14, 769 students across all disciplines marked the largest number of students ever graduated in NOUN. Adamu said that the greatest pride of the event was the graduation of Obasanjo as NOUN’s first PhD student. “His successful completion of a rigorous course of study and going through the numerous examination processes leading to PhD in Christian Theology and its confirmation by the University Senate in January is his most powerful statement about lifelong education. “His patience and perseverance in pursuing a doctorate degree programme at his age and status in life is a roadmap to all of us. “It clearly communicates three credos: you are never too old to learn; you are never too powerful to learn and you are never too full of learning “Obasanjo embodies all these and therefore becomes the poster boy of education renaissance. Nigeria congratulates the oldest PhD graduating student in its history,’’ he said. On his part, NOUN’s Chancellor, Dr Lawrence Agubuzu, said that Obasanjo had made a giant stride. The traditional ruler said that Obasanjo had proven to be an all-round model to every citizen of Nigeria. “Whoever needs a lesson on lifelong learning should simply study the trajectory of Obasanjo’s education. In his remark, Obasanjo expressed delight for being awarded doctorate degree by NOUN. He described NOUN as one of the best institutions of learning in Africa. The former president said that he had many honorary degrees but none was as fulfilling as bagging a doctorate degree from NOUN. “I feel a different sense of joy today from when I receive honorary degrees; at last count, I have received about 20 honorary degrees from top grade universities all over the world. “The earned doctorate degree I receive today comes with a different sense of fulfillment and accomplishment. “My studentship of NOUN confirmed that via the ODL platform, there  is no age limit, no status barrier, no social lineage.’’ He said that during his student’s days at NOUN, he requested that he should not be given any special privilege because he wanted to go through it as other students. “I went through the rigours and discipline of post graduate studies like any other post graduate student. “I thank my supervisors for giving me the opportunity of going through the grail and the crucible of research for my doctoral work. “I could not have had better supervisors; they were firm, strict but meticulous and tortuous,’’ he said. He thanked the staff and management of NOUN and congratulated fellow graduands.

My Husband Doesn’t Have To Be Rich- Zainab Balogun