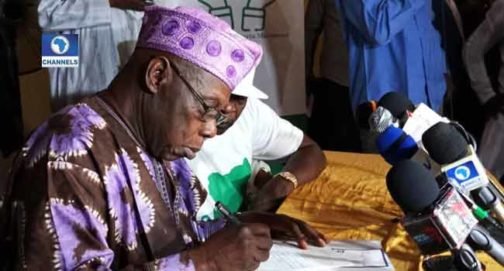 The former President registered as a member of the coalition in Abeokuta, the Ogun State capital on Thursday, a day after the new movement was launched in the Federal Capital Territory, Abuja.

Obasanjo had called for the movement in his lengthy statement criticising the performance of President Muhammadu Buhari and his administration.

He had also advised the President against seeking reelection despite calls by his supporters to do so.

For Obasanjo, who likened the All Progressives Congress and the Peoples Democratic Party to “two evils”, the only way out for the country is a new movement.

His absence at Wednesday’s launch of the coalition in Abuja had led to questions about his involvement with the group.

But his registration on Thursday has put an end to speculations about whether he would actively participate.