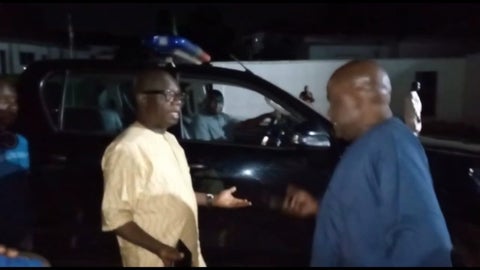 The Ondo State Deputy Governor, Mr Agboola Ajayi, has raised the alarm that his police escort has been withdrawn on the order of the state Police Commissioner, Mr Bolaji Salami.

The deputy governor has been in the centre of the crisis in recent times after his defection from the All Progressives Congress to the Peoples Democratic Party.

The CP had on Saturday blocked the deputy governor on his way out of the government house with his official vehicle.

In a statement issued on Wednesday by his Chief Press Secretary, Mr Tope Okeowo, the deputy governor said the withdrawal of the escort had been putting his life, that of his family and staff in danger.

He said, “We are not oblivious of their surreptitious move to undermine the security of the deputy governor and strip him of his security apparatus to make him venerable in order to carry out their evil agenda.

“President Buhari, the Inspector General of Police, Mohammed Adamu, and the Director-General of Department of State Services, Yusuf Bichi should be aware of this latest ugly development in Ondo State.

“Should anything happen to the Deputy Governor, his family and staff, the Commissioner of Police in Ondo State should be held responsible.”

In a reaction, the state Police Public Relations Officer, Mr Tee-Leo Ikoro, denied the allegation, saying there was no such plan from the CP.