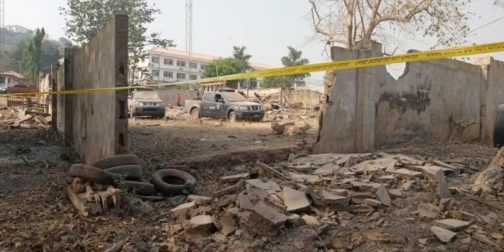 The explosion which triggered panic among residents of Ado Ekiti, the state capital, on Saturday morning was caused by counter-terrorism accessories kept in the Ordinance Explosive Disposal Department (EoD) of the Ekiti Police Command.

The EoD is located within the premises of the old government secretariat, said Ekiti State Commissioner of Police, Mr Asuquo Amba.

The explosion reduced the bungalow housing the EoD office into rubbles while the adjoining offices of the Nigerian Union of journalists, Correspondents’ chapel, Ekiti chapter were also affected.

It also shook buildings located far away, shattering louvre blades, while windscreen of vehicles parked around the offices were also shattered.

Speaking to journalists at the scene of the explosion, Amba said: “This is the office where they keep detonation accessories. The explosion must have been caused by equipment kept in their stock house.

“The area has been cordoned off. We are going to devise means of ensuring Improvement in the stocking of these equipment next time.

Governor Kayode Fayemi and his deputy, Chief Bisi Egbeyemi had visited the site of the explosion.

Commissioner for Information, Muyiwa Olumilua, said after the incident: “An explosion was reported earlier this morning at the Explosives Ordnance Disposal (EOD) office in Ado Ekiti.

“An initial on -the- spot assessment confirms that there are no casualties and the area is secure with no further threats.

“Members of the public are advised to go about their normal duties”, the statement said.