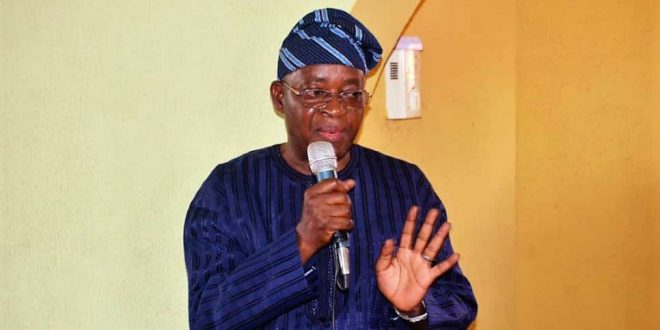 Governor Adegboyega Oyetola of Osun State has declared his commitment to improving the welfare of all workers and pensioners in the state.

While addressing a section of protesting pensioners at the government secretariat in Osogbo on Wednesday, Oyetola also debunked the claim that the state had received another tranche of Parish Club refund from the Federal Government.

The 2011-2012 set of pensioners had taken to the streets on Tuesday and Wednesday to protest the non-payment of 15 months pension arrears.

Represented by his deputy, Benedict Alabi, the governor said he had approved a 100 per cent increase in the amount being released monthly to settle arrears of gratuity from N40m to N80m and the issuance of bond certificates to more retirees under the Contributory Pension Scheme.

He said his administration had been faithful to promises made while seeking office as reflected in the prompt payment of workers’ salaries.

He said, “Osun State is not operating in isolation and if such intervention fund would be released by the Federal Government to the state, it would not be disbursed in secret. We are running a transparent government. Our administration has never failed in performing its statutory obligations to meet the needs of its workforce.”

Meanwhile, the Osun State Triangular Group of Pensioners has condemned the protests by the 2011-2012 faction of pensioners.

The group, at a news conference in Osogbo by its chairman, Prince Rotimi Adelugba, debunked the claim by the protesters that the pensioners’ salaries were not being paid as and when due, adding that the protest was politically motivated.

He said, “As concerned pensioners, we are constrained to state that our colleagues’ allegations are far from the truth. As we are all aware, not all of us pensioners are being owed the 15 months pension arrears.

“Our findings reveal that the government has not received any Paris Club refund as claimed by our colleagues. We are also in receipt of the information that some of our colleagues have collected their bonds recently and that some are ready for collection.”