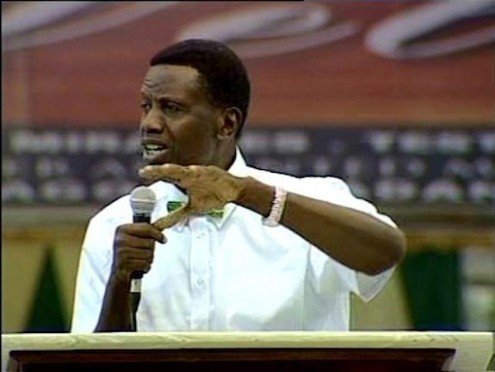 This formed part of his sermon at the April 2018 Holy Ghost Service and Vigil of the Church at its prayer ground in Mowe, Ogun, on Kilometre 45 of Lagos – Ibadan Expressway, which ended on Saturday.

The  monthly programme was attended by Vice President Yemi Osinbajo and his wife, Dolapo, as well as thousands of Christian faithful.

Pastor Adeboye expressed gladness for the return of no fewer than 105 students of the Federal Government Technical College, Dapchi, Yobe, abducted by the Boko Haram terrorists in February.

“We thank God for the release of the girls and pray that all the girls yet to secure their freedom should be freed,’’ Adeboye prayed.

He also offered special prayers for those afflicted by all sorts of strange ailments and problems, especially for the barren so that by this time next year, they should be attending the Holy Ghost Service with their children.

The cleric said he had pity for the youth whose parents were involved in evil as such evil often affected their spiritual and physical development.

Quoting Bible verses, especially Ezekiel chapter 16, verse 44, and John 8, verse 44, Adeboye reminded the faithful that God visits the crimes of the father on the children.

According to him, if the children are to be blessed something should be done by their parents.

“If the parents are of the Lord the Lord will continue to bless them and their children will not beg for food,’’ Adeboye stated

He also warned those who got involved in marriage relationships via the social media without finding out the background of their would-be partners, recalling how in the past parents inquired about spouses before approving marriages for their children.

He noted that our elders were uneducated but very rich in knowledge.

“If you marry on facebook, you cannot tell what will come.