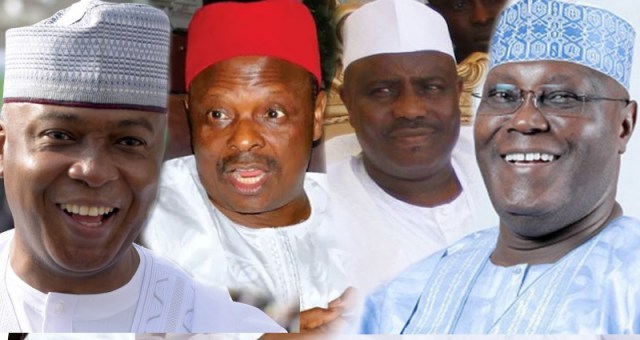 However, one of our correspondents gathered that some of the aspirants were apprehensive that the list could be altered at the last minute.

Makarfi confirmed to one of our correspondents on Friday, that the list had been handed over to him and others.

But he refused to disclose the number.

However, Atiku, through the Director-General of his campaign organisation,  Otunba Gbenga Daniel,  put the number at 4,000.

One of our correspondents gathered that there were issues concerning the delegates lists from Kano,  Lagos and Ogun states.

For example,  a camp of one of the aspirants said that the name of a former Speaker of the House of Representatives, Dimeji Bankole, was likely going to feature in the alleged revised version of the delegates’ list from Ogun State.

The camp said that this might be resisted, saying that Bankole had left the PDP for another party in the state.

In the case of both Kano and Lagos states, it was learnt that the national leadership of the party met on them in Abuja on both Thursday and Friday. Though decisions taken on them were still sketchy as of the time of going to press on Friday, a source at the National Working Committee of the party told one of our correspondents that “whatever decision we take will be in the interest of everyone. “

Meanwhile, delegates in Port Harcourt were on Friday night, discussing the likely outcome of the primary.

Based on their discussions at their various hotels visited by one of our correspondents,  the likely winners might be among Tambuwal, Kwankwaso, Atiku and Saraki.

Some aspirants may step down

One of our correspondents gathered that some aspirants might step down today before the commencement of the primary.

Already, meetings were to be held late on Friday night among some of them.

“The meetings were to discuss area of interest and how to win votes from geopolitical zones,  “ a source said.

The Rivers State Police Command said on Friday that at least 12,800 personnel would be deployed to ensure a peaceful conduct of the National Convention of the PDP.

The state Police Public Relations Officer, Mr. Nnamdi Omoni, told Saturday PUNCH in a telephone interview that the security personnel would be deployed to Adokiye Amiesimaka Stadium, venue of the presidential primary, and other strategic locations and flashpoints.

Omoni explained that all departments of the Police Command would be involved in ensuring security of lives and property during the exercise.

He added, “We are deploying 80 per cent of the 16,000 policemen in the state for the convention to ensure that there will not be any security breach. Our warning to political thugs and other hoodlums is that they should stay away from the venue and even the entire state. If they want to be in the state, they should be peaceful in their conduct.”

In a related development, Governor Seriake Dickson of Bayelsa State has said that all the delegates from the state will adopt a common position on the party’s presidential primary.

In a statement on Friday by his Special Adviser on Media Relations, Fidelis Soriwei, the governor noted that delegates from the state and the entire Ijaw nation would vote for a candidate with enough courage and capacity to restructure the country and one who would promote mutual respect for all Nigerians as well as create a level playing field for all, irrespective of ethnic and religious leanings.

Meanwhile, Saturday PUNCH investigations have revealed that delegates from Imo State are torn between two aspirants; the Senate President, Dr. Bukola Saraki, and the Governor of Sokoto State, Aminu Tambuwal.