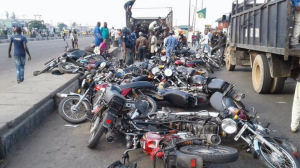 At least 40 suspected commercial motorcycle operators were yesterday arrested for allegedly attacking policemen at Iyana-Ipaja, Lagos State, over current steps to stop them from operating in the metropolis.
The suspects were among hundreds of commercial motorcycle operators also known as Okada riders who joined in the violent protest that erupted in the area yesterday morning.
Scores of Okada riders took to the streets to protest the ban on their operation by the state government. The government had penultimate Tuesday proscribed the use of motorcycles and tricycles as means of transportation in six LGAs of the state.
Confirming the arrest, Bala Elkana, State Police Spokesman, said that on Wednesday at about 10.20am, officials of the State Task Force on Environmental Sanitation and Special Offences, and teams of Police Officers carried out enforcement on restrictions of Motorcycles and Tricycles at Aboru area, where 86 Motorcycles were impounded.
He said riders of the impounded motorcycles and thugs in large numbers advanced to Iyana-Ipaja and attacked Police Officers on duty at the roundabout, Alaguntan junction and Aboru junction. “One Inspector Salifu Umar was injured by the hoodlums but no life was lost in the attack.
The injured Inspector was rushed to hospital and he is responding to treatment. One of the Lagos State Traffic Management Authority (LASTMA) vehicles and two bicycles belonging to the state Neighbourhood Watch patrol team were burnt by the hoodlums.
”The windscreen of the Police patrol vehicle was also damaged. Reinforcement was sent to the affected areas by the Command Headquarters and the situation was brought under control. 34 suspects were arrested in connection with the violent attacks,” he added.