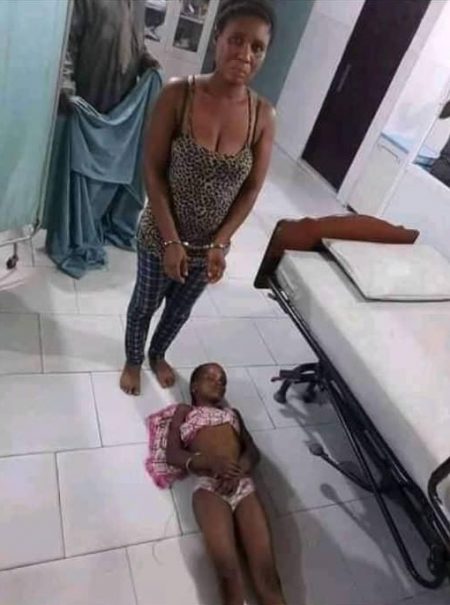 The wife of a soldier with 6 Division of the Nigerian Army in Port Harcourt has been arrested, along with her husband, for beating her 10 year old stepdaughter to death for eating the plantain bought by the father.

While the middle-aged woman was savagely beating her step daughter, a female soldier ran into the house to intervene, but she was ordered out by the woman’s husband.

The report said the woman continued with the beating after the female soldier left the apartment until the 10 year old girl slumped and died. She was belatedly rushed to a Clinic, but it was too late to save her.

Both the husband and wife are now in detention in the 6 Division of Army Barracks of the Nigerian Army, Port Harcourt Barracks.

The photo of the woman in handcuffs, standing close to the lifeless body of the little girl close to a hospital bed has gone viral.

No statement has been issued by the authorities of the 6 Division of Nigerian Army on the issue.