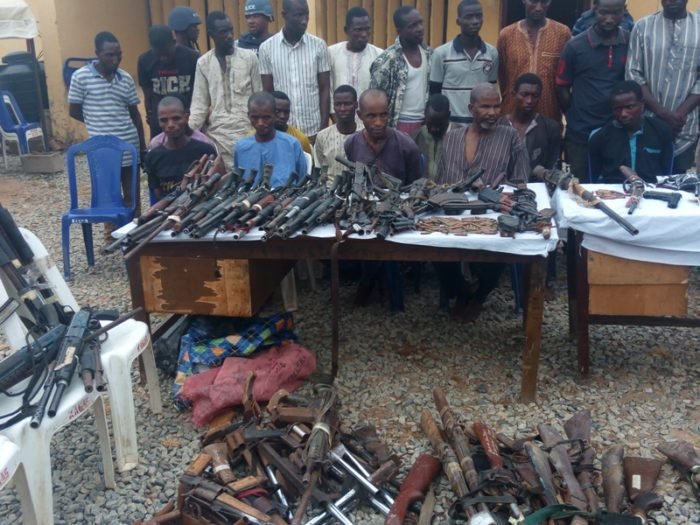 He said to sustain the renewed crime prevention and control strategies to root-out all criminals perpetrating violent crimes and all forms of criminalities throughout the Country, the Inspector General of Police, IGP Ibrahim Idris had ordered the Commissioners of Police and their Supervising Assistant Inspectors-General of Police to commence immediate raids of identified criminal spots, crime flash points, and other vulnerable locations in every State of the Country.

“These strategies are already yielding positive results in the arrest of 22 suspects terrorizing Niger, Kaduna, Nasarawa and Zamfara States.

He said the first gang bursted were responsible for kidnappings, armed robbery and several car snatching in Niger, Kaduna, Nasarawa and Zamfara States, saying that the gang leader, Murktar Abdulmalik a.k.a Military AK47 was arrested on Friday at Numbwa town in Gurara LGA of Niger State after exchange of fire with the Special Tactical Squad personnel attached to Operation Absolute Sanity that lasted about an hour before he was overpowered and arrested.

“An AK47 Rifle and Forty (40) rounds of AK47 ammunition were recovered from his possession. During interrogation, he confessed to have participated in more than 10 robbery attacks on innocent people in FCT, Niger and Kaduna States, and admitted that his gang has also snatched at gun point more than eight exotic cars.

“Murktar Abdulmalik a.k.a Military AK47 further confessed to the killing of one of his gang member Murktar Zubairu who he claimed was an ex-Civil Defence Officer before he killed him and buried his corpse in a shallow grave in a location in Niger State after a disagreement on the sharing of their loot in one of the robbery operations.

“Investigation is being intensified to arrest other members of the gang. They will be arraigned in court on completion of investigation,” he said.

Moshood added that the second gang was linked to the notorious and vicious Lawal Kwali who is a kidnapping, armed robbery, car snatching and cattle rustling kingpin recently arrested by the Police in Niger State.

He said the two suspects arrested confessed to be responsible for killing one Alh. Mohammadu Wanfu, who was kidnapped and killed in November 2017 in Shiroro LGA of Niger State, adding that they would be arraigned in court on completion of investigation.

On the third gang, he said working on actionable intelligence, members of the gang were trailed and arrested in Niger and Nasarawa States and that in their possession, the Police team recovered three AK49 Rifles, nine AK47 Rifles, 20 Pump Action Guns, two  Double Barrel Gun, 20 locally made dane guns, one locally made revolver pistol using AK47 ammunition, 144 AK47 ammunition.

“The leader of the gang claimed to have inherited the AK49 rifles from his late elder brother, one Alh. Tukur (deceased). Investigation is being intensified to arrest other members of the gang at large. They will be charged to court on completion of investigation,” he stated.

On the fourth gang, Moshood said “this gang was responsible for the kidnap for ransom of one Zainab Yakubu at Ikara LGA of Kaduna State on the 2/2/2018. The victim was released after they collected the sum of N250,000 as ransom. On receipt of the complaint after the victim regained freedom, the Special Tactical Squad personnel trailed and arrested the five (5) suspects. They confessed to the crime and admitted that they shared N50,000 each from the ransom collected from the victim. They will be arraigned in court on completion of investigation.

The 5th gang members were arrested for several cars snatching at gun point. They confessed to have been responsible for car snatching and stealing of cars from where they were packed in the FCT, Niger and Kaduna States. One of the suspects, who was previously a driver with Hon Anthony Oworu, a member of the Federal House of Representatives confessed to have stolen with the help of his gang members, a Peugeot 407 Saloon car belonging to the Hon. member. The car has been recovered by the Police and investigation is being intensified to arrest other suspects at large. They will be charged to court on completion of investigation.

“The Nigeria Police Force will continue to sustain the tempo of the fight against kidnapping, armed robbery, car snatching, cattle rustling, unlawful possession of prohibited firearms and other violent crimes in the country and guarantee adequate protection of lives and property,” he said.