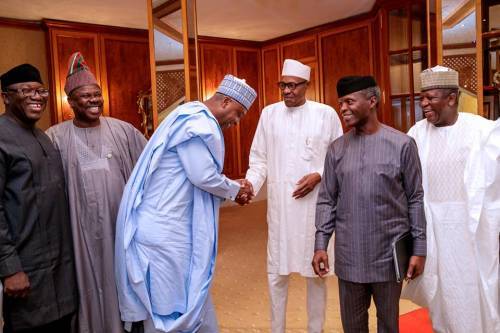 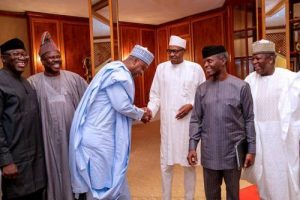 The All Progressives Congress (APC) has made deft moves to avert an impending exodus of its bigwigs to the leading opposition party, the Peoples Democratic Party (PDP).

During his meeting with Senate President Bukola Saraki, Vice President Yemi Osinbajo and some All Progressives Congress (APC) governors, President Muhammadu Buhari begged the nation’s number-three man not to leave the ruling party.

On Wednesday, Saraki, who is scheduled to join the Peoples Democratic Party (PDP) next week, held a meeting with Uche Secondus, National Chairman of the PDP; Nyesom Wike, Governor of Rivers State and n-PDP’ leaders.

After the Wednesday meeting with PDP leaders, he met with the President along with the VP and Governors Aminu Masari of Katsina State, Atiku Bagudu of Kebbi, Ibikunle Amosun of Ogun State and Abdulaziz Yari of Zamfara, on Thursday.

In its report on the meeting, the President appealed to Saraki, believed to be the arrowhead of the impending mass movement, to stay back in the party.

It was reported that Saraki’s meeting with Buhari at the Presidential Villa was set up by APC governors, including Alhaji Aminu Masari (Katsina State), Senator Ibikunle Amosun (Ogun State) and Senator Atiku Bagudu (Kebbi State), who, after initial discussions with the Senate President at his Abuja residence on Wednesday night, prevailed on the President to meet with him and persuade him not to defect from the party.

It said Adams Oshiomhole, the APC National Chairman, also spent much of Monday at Saraki’s house trying to straighten things out, followed by another meeting with Saraki in Ilorin on Wednesday by the Deputy National Chairman (South), Chief Niyi Adebayo, who led a delegation on a fence mending mission.

Buhari is also expected to meet with Yakubu Dogara, Speaker of the House of Representatives, around the weekend.

Saraki is still expected to join the PDP next week. Expected to move with him are Governors Aminu Tambuwal of Sokoto State and Ahmed Abdulfatah of Kwara State.
Samuel Ortom of Benue State, who was looking good to defect as well having already announced his departure from APC on Monday saying he had been “red-carded”, made an about-face on Thursday after meeting with Oshiomhole.