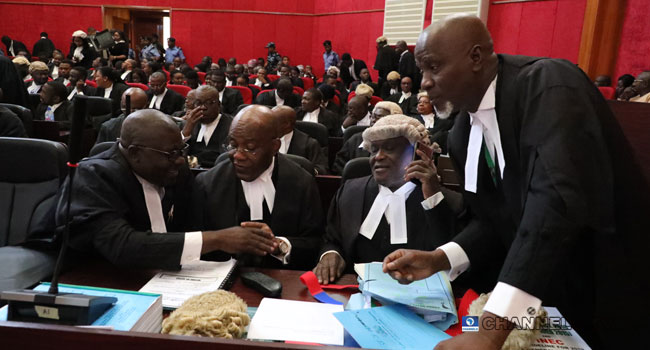 Presiding over today’s tribunal is the President of the Court of the Appeal, Justice Zainab Bulkachuwa.

In attendance is the Former chairman of the Economic and Financial Crimes Commission (EFCC) Mallam Nuhu Ribadu who is representing President Muhammadu Buhari of the All Progressives Congress (APC) and National Chairman of the Peoples Democratic Party (PDP) Uche Secondus representing the party.

Three other petitions filed by other political parties and their candidates will also be heard today.

The PDP had on May 10 written a petition asking the Justice Zainab Bulkachuwa to rescue herself from the trial on the grounds that her husband had won a seat to the Senate on the platform of the APC and also because of a statement in her speech at the inaugural sitting of the tribunal when she said that no matter how well an election is conducted there are bound to be disputes.

At the opening of the sitting, counsel to the PDP Levi Uzoukwu made an application to address the chairman of the tribunal in chambers for 10 minutes with the lead counsel for the respondents.

Meanwhile, counsel to President Muhammadu Buhari, Mr Wole Olanipekun on his part said that although he was informed by the petitioner that such an appeal would be made, he suggested that two lawyers from each party in the suit be allowed in chambers, a position which INEC’s counsel Mr Lateef Fagbemi aligned himself with