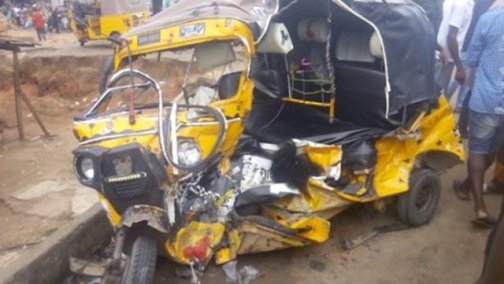 Tricycle operators under the aegis of Tombia Along Keke Unit (TAKU) on Tuesday, in Yenagoa, Bayelsa state protested the killing of their member by a tipper driver.
The protesters blocked a section of the Tombia-Amassoma Road and stopped other operators from plying the road during the protest.

The tricycle operator was killed along with four of his passengers after a tipper driver ran into his vehicle.

The accident happened on Tombia-Amasoma Road in Yenagoa, Bayelsa on Monday night

He said the Police came to clear the remains of the victims and the mangled tricycle, along with the truck that hit them.

“The incident occurred late on Monday night and we deployed our operational team to the incident site.

“By the time they got there, the Police had responded and cleared the road and we are closely working with them on the accident.

“That is the beauty of the inter-service cooperation amongst security agencies in Bayelsa at work,” Igwe said.

A sand dealer in the area, Tobis Diseye, said the tipper driver was trying to evade a heap of chippings on his lane when he ran over the tricycle operator and his passengers on the opposite lane.

A former chairman of TAKU, Henry Mbu, said in an interview with newsmen that they were saddened by the incident.

Mbu, who stated that his successor died two weeks ago, said: “We are not happy. We are not happy. After the day’s work, yesterday, in the evening, we saw one of our drivers and four passengers dead.

“Their bodies were scattered. If you saw the dead bodies, you would pity them. It was a tipper driver that caused the accident yesterday.

“We are doing this protest to tell the whole world that we are not happy about the killing of our member and his passengers by the tipper driver,” he said.

90% of Boko Haram’s victims are not Muslims, Fani-Kayode moves against Buhari