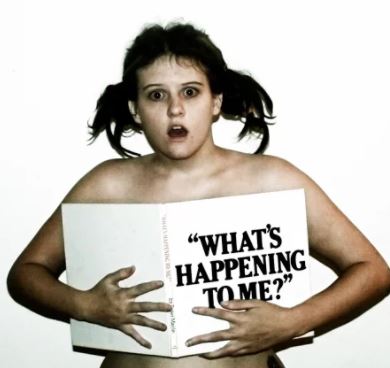 There have been recent cases of girls attaining puberty at a very early age without a concrete explanation, but this piece and report from Tori appears to give many answers to questions.

Showing all the trappings of a young adult, one would need more than just words to believe that Funke (surname withheld) is just eight years old.

At her age, she already developed br**sts, one of the primary indicators of puberty in females. And the way other parts are growing very rapidly would almost give an impression that she’s someone in her early 20s.

But, truly, Funke is eight, according to her dad, who also expressed surprise with the way she’s ‘growing’, and is now unsettled due to the girl’s likely premature s*xual attention from men. He is equally unsure if the situation is normal, more so that she has also started menstruating. The medical term for early puberty is called precocious puberty.

Realistically, Funke is not alone and her father’s fear is quite understandable. In fact, her case is a fitting reflection of what now obtains across the world, whereby young girls now show obvious signs of reaching puberty, as against what obtained in the past, say about 20 years ago, when girls wouldn’t exhibit any sign of puberty until about 15 years upwards.

Meanwhile, other indicators of puberty include underarm hair, certain body odour, since the sweat gland would have become active, pubic hair and vaginal discharge, which is a precursor of menarche, the first occurrence of menstruation. All these are now happening to girls below 12, and according to a study published in Paediatrics as far back as 2010, a number of the girls surveyed had reached puberty as early as seven years, evidenced by chest development.

According to a consultant paediatrician, Dr. Rotimi Adesanya, the average age a girl is supposed to attain puberty is 11, but “these days some of them show those signs at age eight.”

However, there are reasons for this early puberty, and it is pertinent to point them out, perhaps to allay the fears of such parents. These reasons include:

Obesity: Literally, obesity is caused by eating too much and moving too little. Thus, if you consume a high quantity of food, particularly fat and sugar, and you don’t burn off the energy through exercise and physical activity, much of the surplus energy will be stored by the body as fat and that leads to overweight or obesity. This was the explanation given by the National Health Service in the United Kingdom. While it is seen as a general problem, obesity has been found to be a major cause of early puberty, especially in girls.

Dr. Adesanya explained that girls now reach puberty early because they eat junk food, snacks, oily food, etc., without doing exercises. He said these days; children would rather play computer games or play games on their parents’ or siblings’ smartphones rather than go out to do exercise. Thus, that lifestyle of eating without exercising has led to obesity and now makes them to reach puberty early. He said, “Obesity has strong links with precocious puberty and what favours it is the diet and sedentary lifestyle. Children no longer do exercises; they don’t trek to their school the way we did back then, which helped us to burn fat from our body. So, that is one major cause of early puberty.”

Stress: This is one other factor that has been found to aid early puberty in girls. Adesanya explained that traumatic experiences and emotional problems impact on the female reproductive system. He said this had to do with the interconnection among the brain, emotions and the reproductive system, like the hormones controlling chest growth and menstruation. “Children that go through a traumatic experience or emotional problems may see their period earlier, even though the impact is not as high as that of obesity.

Also, a study by a professor of family studies and human development, Bruce Ellis, and Prof. Marilyn Essex of the University of Wisconsin found that family conflict could influence how early or late girls attain puberty. In the study, which was reviewed on WebMD, a website that provides valuable health information and tools for managing health, they asked the parents of the girls about their economic difficulty, marital problems, parenting style and family stress. It was revealed that girls who live in families with great parental support and less marital conflict experience their first hormonal changes later in life than girls who live in homes where there are marital conflict, family issues, poor parent support, depressed parents and other such unpleasant issues. These were identified to be associated with puberty. “Even modest family conflict or stress may influence a young girl’s s*xual development and these were the normal stresses of growing up, not serious abuses,” Essex tells WebMD.

Now that it is almost inevitable for children to reach puberty early, because children from the rich or average income earning homes are likely to eat so much or even eat junk food, those from poor homes could be stressed emotionally, and those from either divide could come from home with family issues, girls who show signs of puberty should not be treated as aliens.

This development has no doubt made them endangered species, given the rate of r*pe and s*xual abuse, but parents have been advised to pay more attention to their young female children, because their changing physique could make them attractive to the males, even when they are not mature enough to refuse such (negative) gestures.

An endocrinologist, Dr. Glenn Braunstein, said open communication, nurture, and knowledge of the child’s activities would be good ways to prevent the child from getting into such avoidable troubles. In his analysis on Huffpost, Braunstein said whether puberty arrives early or later at the more expected time, it is always a challenge for children, especially girls and that it was up to parents, guardians and older siblings to help them to be the finest men and women possible, by assisting them through that stage.

He added, “Parental nurture, generally considered a key factor in curbing risk-taking, may be even more important for early-maturing girls. The thinking is that parental influence can help decrease these youngsters’ susceptibility to peer influence, assist them in developing better coping skills and diffuse negative feelings that might turn into negative thoughts and actions.”

Another solution advanced is s*x education, which according to experts, will prepare the girls for the change that is to come and what to do when it comes eventually. However, the experts stressed that one way to make this effective is for parents to encourage their children to communicate freely with them.

A consultant paediatric endocrinologist, Dr. Elizabeth Oyenusi, had said at age eight, a female child should be taught about s*x, so they don’t learn about it from outside or do so the hard way.

She had said, “Whether for a male or female child, once they clock eight years, parents should talk to them about s*x, and there is no need to use nicknames or graphics, more so that such children are exposed to different images on the television or even the Internet. A girl is ready for such education when her br**sts begin to come out or when she clocks eight.”

Apart from this, parents are advised to teach their children when to say no, and that in certain (identified) situations, it is okay to say no to an adult. It has also been found to be helpful when children are taught where they should not be touched by others; how to get out of an uncomfortable situation and what to do if the adult wouldn’t let go.

A forensic psychologist and expert in the field of mental health, violence, mental health and addiction, Dr. Kathryn Seifert, in his post on Psychology Today, noted that given the way young girls tend to be susceptible to male attention, even at that young age – since they already show signs of puberty – highlighted ways by which parents could avoid such negative occurrences from happening to their children.

She said parents must encourage their kids to talk to them about how their day went, teach them when to run away from an adult, take action and let them see their parents take action when they make reports, which she said would build their confidence level.

She added, “Teach children that the danger may come from someone they trust. Tell your kids that bad touch is bad touch and no one gets to do it to our bodies. If anyone does bad touch, you go to a grown-up for help. When you are not sure about whether something a grown up is doing is okay, ask another grown up to help you.

“Also, take action if you suspect abuse; understand the signs, such as significant changes in sleeping, eating, mood, or strange behaviour that does not quickly go away; and know where your children are and who they are with at all times.”