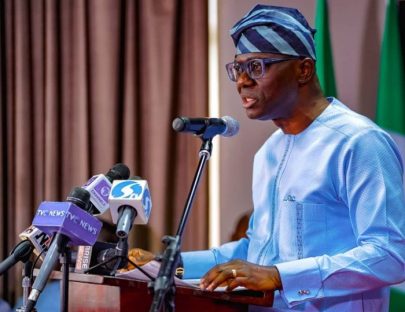 Lagos State Governor, Mr. Babajide Sanwo-Olu has commiserated with families that lost their loved ones following a pipeline explosion that occurred at Abule Egba on Sunday.

He also sympathised with those that lost property and other valuable items to the inferno.

In a statement by his Chief Press Secretary, Mr. Gboyega Akosile on Monday, Governor Sanwo-Olu said he is heartbroken to hear of the sad incident, which was caused by the nefarious activities of economic saboteurs.

The fire broke out on Sunday evening after suspected hoodlums vandalised petroleum pipelines around the Abule Egba axis.

The Governor urged security agencies to ensure that those behind the unfortunate incident were brought to justice, saying the  government would not fold its arms and allow unscrupulous elements in the society to continue to wreck havoc in the State.

Sanwo-Olu also urged the youth to desist from criminal acts such as pipeline vandalism and other sensitive installations across the State, noting that such activities were putting innocent lives at risk. He advised them to instead channel their energy to positive use.

The Governor however thanked the first responders; the Lagos State Emergency Service (LASEMA), the Lagos Fire Service and other emergency agencies for acting promptly to avert what may have resulted in calamity of monumental proportions.

Sanwo-Olu revealed that Government has done preliminiary assessment of the incident and the situation report has been collated while the full impact assessment is ongoing.

Sanwo-Olu, in the statement reiterated his call on the residents to be cautious during the period of harmattan.

He said: ”we urge the residents to be very careful in this season. The dryness of the weather is a big attraction to fire. Residents should recall our warning earlier in the month about the need protect ourselves from any form of fire disaster.”

Sanwo-Olu prayed for the souls of the victims and also beseeched God to grant the families the fortitude to bear the irreplaceable loss.

SANWO-OLU CALLS FOR EQUAL TRADE PARTNERSHIP BETWEEN UK AND AFRICA