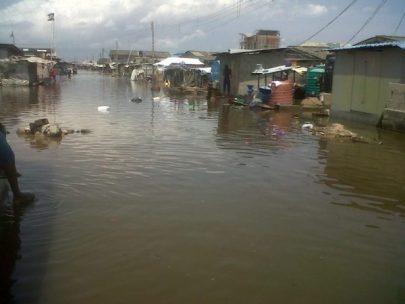 Okun-Alfa in Eti-Osa LGA of Lagos: Flooded. Scientists warn the worst is on the way[/caption]

Three environmental scientists have warned people living in coastal cities, such as Lagos, to beat a retreat now or face the prospect of a disorderly, chaotic withdrawal in about three decades, as climate change worsens.

The scientists, A.R. Siders, Miyuki Hino and Katharine J. Mach, in a new policy paper, published 23 August in the journal Science, advised that that the only way to avoid a chaotic withdrawal is to start planning now for the inevitable “retreat” from coastal cities.

“Faced with global warming, rising sea levels, and the climate-related extremes they intensify, the question is no longer whether some communities will retreat — moving people and assets out of harm’s way — but why, where, when, and how they will retreat,” the authors of the paper wrote.

As many as 1 billion people are expected to be forced out of their homes by the droughts, floods, fires and famines associated with runaway climate change over the next 30 years — and they all have to go somewhere. This massive global exodus can go one of two ways: either it will be a chaotic mess that punishes the world’s poor, or it can be a path to a fairer, more sustainable world.

Rather than dealing with these forced migrations on a reactive, disaster-by-disaster basis (as many emergency evacuations do now), the researchers propose taking a “managed and strategic” approach to the problem, setting up policies and infrastructure now to help climate refugees transition into new homes and out of harm’s way as soon as possible.

The steps to accomplish this task range from the common sense — for example, limiting property development in at-risk areas (like coastal cities) and instead investing in creating affordable housing in safer inland communities — to the incredibly complex. For instance, the authors want to build infrastructure that maintains the cultural heritage of marginalised communities that wind up having to leave ancestral homes.

“Retreat may exacerbate historic wrongs if it relocates or destroys historically marginalised communities,” the researchers wrote. “Conversations around who should pay for retreat will almost certainly need to address reasons why certain communities find themselves at risk.”

Indeed, the researchers wrote, retreat could be an opportunity to revitalise communities and redistribute wealth in a more sustainable way. For example, it could be a chance to end real estate practices that incentivise living in at-risk areas. Retreat could also be a chance to subsidise new schools, hospitals and affordable housing in safer inland regions instead of making belated improvements to at-risk areas, like building expensive new sea walls to shield communities that have already been battered by severe storms and abandoned before.

“One proposal for Bangladesh suggests investing in a dozen cities to provide infrastructure along with educational and employment opportunities to draw successive generations of people away from low-lying coasts,” the authors wrote. “Retreat is not a goal in and of itself, but a means of contributing to societal goals.”

While widespread evacuation of climate-prone communities may not occur for a decade or more, the only way to prepare for this unprecedented global challenge is to start planning now. Leaving home is never easy — however, with enough research, investment and strategic thinking, it doesn’t need to be a disaster.

*Adapted from a report by livescience.com